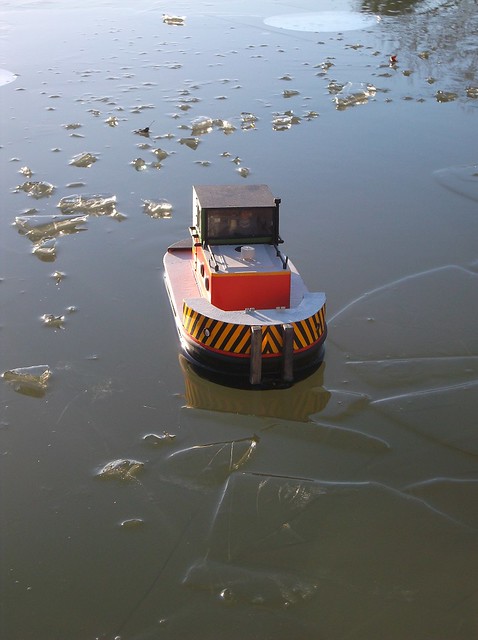 Yesterday morning, the car had to be scraped clear of a thin ice layer, but the day dawned sunny and bright so I decided to head down to the model boat club for some fresh air anyway. All the time stuck at the workbench or in front of a computer needs to be countered with a breath of nice country air regularly.

The lake was frozen as expected. Fortunately, a bit of hard prodding with one of the clubs stouter boat retrieving poles broke enough that I ended up with an area of water about twice the size of a bath with a few bits of ice floating around. Not sure if the fish got a headache but at least there is air going in there again.

My boat of choice was the Bantam tug. Small, heavy and able to turn in its own length. I managed about 20 minutes sailing in my puddle, happily bashing mini icebergs around in the sunshine. OK, it's not what you might call exciting, but a pleasant enough way to spend some time. 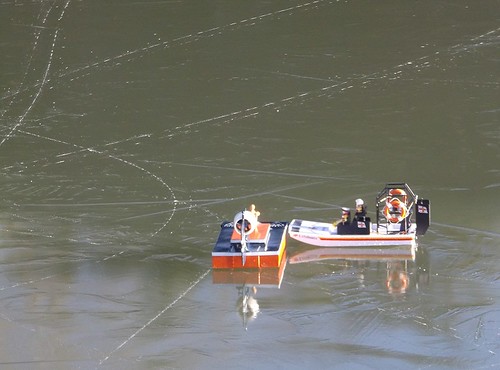 Our secretary, Derek, had other ideas. Rather than clearing the ice, he ignored it with a home-brewed airboat. Fitted with a couple of runner under the hull and propelled by a ducted fan unit from a broken model aircraft, the model skated around at great speed on the ice.

Offered the chance to have a go, I careered around until the battery gave out. In the middle of the lake.

A commercial airboat proved to be a bit useless, the lack of runners made it impossible to control. Eventually Derek managed to nuzzle it against the first boat but the fan didn't provide enough grunt to move it.

Not to worry, the club is prepared - a long length of rope dragged across the ice gathered both models and brought them home in time for us to depart for a nice hot cup of tea.

A morning well spent I think.