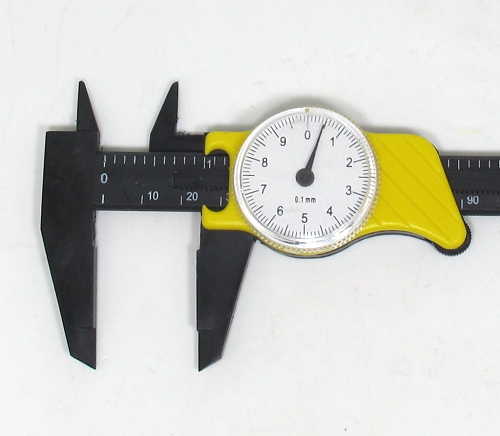 On my workbench I have a plastic dial vernier. It's an invaluable tool for matching drill bits in my miscellaneous box of leftovers with piece of wire or plastic rod. So useful a tool that it doesn't have a place to be put away as I'll only get it out again.

It's also handy for checking measurements on models and other stuff I might be writing about, so sometimes it migrates to the computer. This is a nuisance and I then don't have it to hand at the bench when I'm making stuff.

So, at the last show I attended, I bought another plastic dial vernier. It wasn't as good quality, but it was cheap. Less than a fiver as I recall. (In case you wonder why I don't by an electronic version, I did. The battery always seems to be flat when I want to use it) whereas the original was £15 back in the days when £15 would get you a tram ride to Blackpool and back with fish & chips on the front etc.

There is a reason this thing was cheap. It's rubbish.

The gears driving the pointer are waaaayyy out. Look at the photo, 3.5mm out in 25mm? Imagine what it says at the end of the slider!

So, useless. I don't care how cheap this thing it, it's NOT a bargain. This is the difference between something not costing a lot of money and something being cheap. My original was cheap because it's given years of service. This cost a lot less but is expensive 'cos it's hopeless. Lesson learned, I should have paid attention when handing over money. Please learn from my mistake.

Get a proper metal one. I've had one of these for years
https://www.machinemart.co.uk/p/cm160-dial-caliper/
They also do an imperial version.

Hi Phil,
I had the same problem with the battery in my digital caliper. I read recently that the cheaper ones (Aldi in my case) only turn off the display not the whole instrument hence flat battery if you don't remove it before storage.

In December Cromwell Tools had on offer a Mitutoyo high accuracy 150mm vernier caliper for £33 (Mitutoyo price £54). It is a thing of beauty, a pleasure to use and will last for ever - definitely a bargain in my book. The digital one is at the back of the drawer (with the battery removed).

My worst cheap purchase was a foot pump which literally fell apart the first time I used it. Have been quite lucky with callipers and batteries, although I think they were actually quite cheap.

With the dial gauge, is there any way of rotating the dial?

Although there probably isn't, this isn't actually as stupid a question as it might initially appear to some people.

For a number of years, I worked in a university civils department, as an instrumentation technician. Amongst loads of other things, this involved putting dial test gauges (usually known as "dial gauges") all over structures that were about to be smashed up, using hydraulic jacks.

Well, it was easy to rotate the scales on these dial gauges - but a lot harder to accurately "zero" them. That's right, I often found that other people had rotated the scales, which meant a lot of "aggro" trying to get them to read correctly.

I'm just wondering if something similar might be available on your cheap dial caliper.

While in the subject of mechanical gauges etc., I wonder how many people still know how to read Vernier calipers and micrometers (especially the ones with Vernier scale dividers fitted, to give an extra decimal place on readings).

I also wonder how many people younger than me know how to use slide rules (before anyone asks, I'm 51 - and I taught myself how to use one of these things).

Some people might wonder why I mention "old school" gear like these - well, they're sometimes very useful, not relying on batteries and forcing people to think about the "numbers" they're working with. Slide rules also offer a straightforward way of setting up "look up tables", for scale conversions and the like.

Ah, the difference twixt cheap and inexpensive. I have micrometers (Moore and Wright) and dial calipers (son's previous pair of Mitutoyos). I also have a treasured set of calipers which my Grandad made himself, but never got round to graduating, so I use them as comparators after setting them against my dial calipers.
No cheap tool is worth touching, but the inexpensive Swiss files and chisels I buy at Sunday markets have served me superbly.

I never liked dial calipers when I worked as a turner, they always seemed a bit fragile to be left around a lathe. My preference has always been for vernier calipers (I have several knocking about), they're not difficult to read as well as being a bit more robust and don't need batteries. Look for Mitutoyo, more expensive than exhibition tool stand jobs but you'll never need to replace one and everyone will envy your dedication to accuracy and think you're dead smart for being able to use one.
I do also have a digital caliper, Moore and Wright bought when I still worked a lathe for a living, which sees only occasional use. (Am I the only one who shakes their head when folk mention 'digital verniers'?) As for the micrometers, bore gauges etc. knocking about my house...

And how many realise the usefulness of the depth gauge aspect of calipers? I used mine only yesterday when turning a special slot car wheel to take two tyres, a la Raymond Mays' E.R.A.