Mr Macdermott has come up trumps with this selection for our Saturday films, and by that I don't mean a fluffy haired American President to be.

A road-rail Landrover would make an interesting model and not too difficult to scratch build. Watching this one in action I wonder how practical it would really be though. You need some embedded track to put it on the rails for a start. A dirt level crossing would probably do I suppose.

The film starts with another fascinating machine, a tracked (rather than on-track) vehicle. Best of all, it still exists and I photographed it last time I was in the motor museum for a model show. 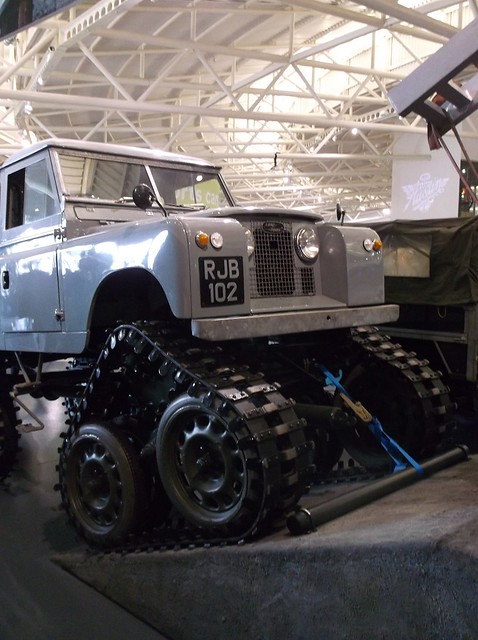 Didn't the LMS have a bus that did that ?

The Rewanui incline here in New Zealand had a land rover converted to rail and was used as an ambulance. See http://nzrmodeling.webs.com/apps/photos/album?albumid=13296944 The model and photos aren't mine, but it's the only photo I could find of it online. Although I have made one myself in G gauge using a 1:24 maisto series 3!

Yes there was a bus, and truck, run by the LMS not far from where I live. Adding the K's kit to my pending pile is an ambition but they are few and far between.

Some lines use things like this for chacking track. If you type 'railroad Alaska' on Youtube you'll find a good series on the Alaska Railroad which features several examples of these, and also diggers and trusks with road-rail capability. Oh, and a slightly overdone malodramatic commentary, but you can't have everything.

Over here Ro-Rail Unimogs are used a great deal as p-way vehicles and light shunters.

Network Rail have these for their welding teams. Defender 110s with drop down carriages either end. When I worked for NR one of the welders rolled one on a roundabout, the heavy retrofitted body twisted the chassis writing her totally off. You could clearly see the twist.

There have also been some Cuthbertson tracked versions of 110's as well. The biggest problem is the extra height, leading to increased chance of roll-over. Still, both are facinating vehicles.