If you want your photos in print, get them on-line 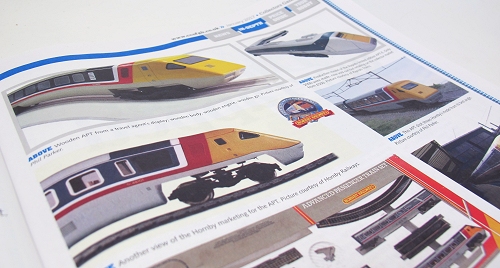 The latest edition of the Collectors Gazette includes a few photos of my APT models, both Hornby and wooden.

Many people would like to be able to say the same. Even for those of us who do this for a living, there is a certain amount of pleasure in nipping into WH Smiths and picking up a magazine with your stuff in it.

The way to do this used to involve submitting images to an editor and hoping they would like what they saw. If you were lucky, the pictures fitted with something they were working on an you got in. If there wasn't anything suitable to hand, they would head to a photo library and buy in images.

The world has changed. My pictures appeared because the author found them on Flickr. I'd put them on the site, properly titled and tagged, a simple Google search bringing them up. A couple of e-mails later and all is arranged.

In the magazine world this is happening more and more. I've used the web to source pictures for articles several times in the last few months. In fact I filled most of a bookazine a few years ago this way.

I would offer a few hints for anyone hoping to do this:
Update: This week I also received the following e-mail:


I am contacting you from the Dr. Phil talk show here in the U.S. There is a photo we found on Wikipedia that may be yours that we would like permission to use in our show.

To give you some background, we are taping a show with a guest named Annie, who is delusional and believes that she is the 'Annie' that Michael Jackson wrote about in his hit song, ‘Smooth Criminal.' In actuality, an audio engineer who worked on the album disclosed that Michael Jackson wrote the song about the CPR doll named CPR Annie. We would like to show this still of “Resusci Anne” in our stage monitors when Dr. Phil talks about the origin of the song.

Reference link:
https://en.m.wikipedia.org/wiki/Resusci_Anne
Does this photo belong to you and can we use it in our show?

OK, no money, but I get a mention in the programme credits. Not bad for a snapshot taken during some first aid training.

Email ThisBlogThis!Share to TwitterShare to FacebookShare to Pinterest
Labels: Magazine

Dr Phil, that's a huge show in the US, congratulations. Shame they can't do a free plug for your book, but I guess that would be kind of hard to fit in with the picture and the theme of the show.