A few years ago, I told you about a talk I'd seen on Meccano fire engines. Well, after the latest boat club AGM, the same gentleman came back to see us again. He's been busy and we thoroughly enjoyed his latest models.

First up, we have a modern Warwickshire Iveco fire engine. 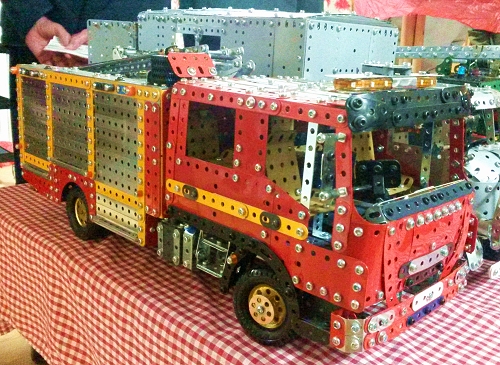 These engines replace a slightly larger design  which is apparently life expired after 10 years. The reduction in size is to allow the appliance to squeeze down streets full of lardy 4X4 cars leaving only a narrow lane down the centre. There is also an issue with female fire fighters being a bit shorter than the men apparently - probably an asset in some situations but not when trying to get equipment out of the higher shelves in the lockers.

Next, from Northamptonshire, we have a go-anywhere Unimog. 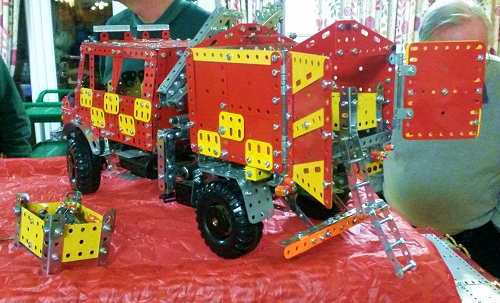 Getting information on this vehicle was trickier than normal apparently. An FOI request was politely declined but as our intrepid builder know the Warwickshire deputy chief, a request was sent that way and then details were forthcoming.

The model has several stilages in the back which are loaded with Meccano made. The chainsaw was the most ingenious and popular! 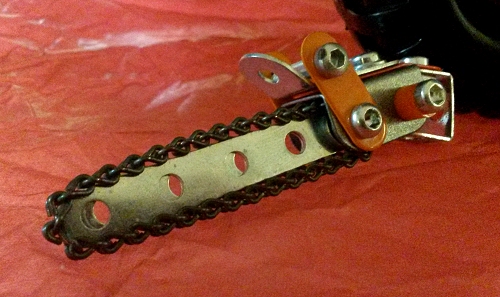