It was the DeAgostini stand that did it. We chatted to a man building a Millennium Falcon and before I know it, my father is signing away a chunk of my inheritance on an R2D2. 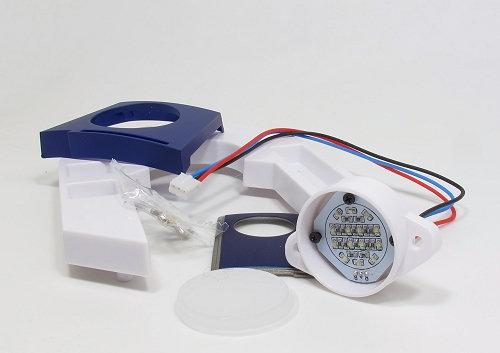 So, in two years, we'll have a working droid. It's got a camera and lights and clever computing so it can respond to either voice or smartphone commands.

At least it isn't as big as his Bismark and since the whole thing is screw together, I can probably avoid getting involved too much. Which will be a shame as this thing looks like a lot of fun.

Part 1 is the "processor state indicator", a multi colour light on the front that will flash. Assembly simply involves screwing a board covered in surface mount LEDs into a plastic housing then plugging in a wire. Testing equipment comes in a few issues time.

The magazine that accompanies the pasts is quite fun. There are concept drawings for R2D2, some made up stuff about the real droid's history and an article on LEDs explaining how they work. You buy this stuff to build the model, but it's an interesting read all the same.

Anyway, watch out for future bits of R2D2 build. I'll not cover every week, just bits where we make stuff. And then perhaps I'll bring the finished model to shows as more fun than toy trains...

I hope you are not getting bored of model railways.

I was really looking forward to that BRM article about …