Station refurb, a grounded coach and painting people in BRM

Bit of a mystery around part of this month's BRM.I've been refurbishing the Stamford East station building we have acquired. Lots of sticking old materials back together and upgrading some of the finishes - modelling techniques change over the years and what we used to be happy with now doesn't pass muster.

Part of the upgrade has involved adding some 1970s signage. My first attempt was this: 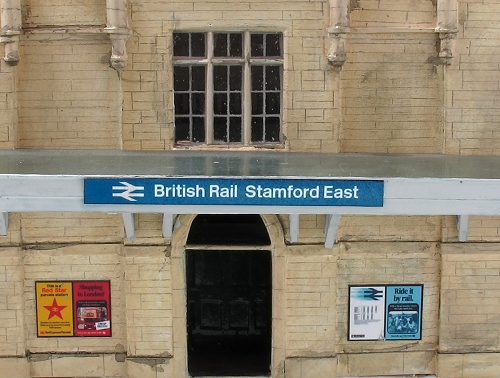 A station sign with a blue background and white text. My inspiration was a photo of Market Harborough station which looks just like this.

When I sent the article over, the response was that it should be black text on a white background with a red logo. Now, this is the colour scheme I'd originally planned, but seeing the photo (I do do some research, honest!) had changed my mind.

Not a problem, the sign was quickly changed, but I'm not sure why it's wrong, or even if it is. A look in the reprinted BR design manual for the period shows that blue IS a legitimate colour, but I couldn't quickly spot what the rules were in the shop, and while £75 isn't unreasonable, I can't justify it right at the moment so I can have a proper read.

Can a reader of this blog help? I'm sure black and white was more common, but blue isn't unknown. Was this a local decision?

Elsewhere, we have some Ruston Quays work with a grounded coach body. 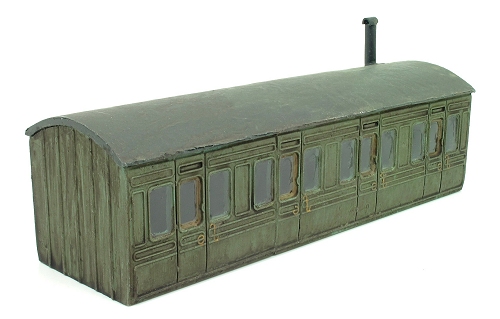 This is a model I'm really quite pleased with. If anyone can guess the origins without reading the piece, I'll be impressed. Suffice to say, there is a decent bit of modelling to get this far. 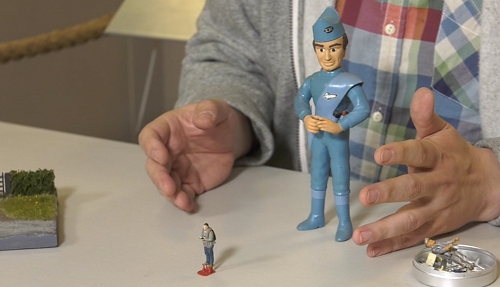 Painting figures isn't that televisual, so I'm covering a little theory too with the help of a Thunderbirds puppet. A puppet I misidentify as Virgil, when he is of course, Scott. That's nearly as big a mistake as wearing a checkered shirt when you are being scanned and subsequently have to paint it on a tiny figure.
We filmed this piece at the Wonderful World of Trains and Planes in Birmingham. It was a fascinating place, which sadly closed down a couple of weeks after we had visited. Too late to alter the DVD, but perhaps the video is a fitting tribute to an interesting attraction now lost to the city.

Looks like a Hornby four wheel coach to me.

I've already read the magazine cover to cover, so I shalln't spoil the origins of the coach as I already know the answer.
Sad to hear about Wonderful World of Trains and Planes being closed now, after seeing the DVD I was thinking of visiting myself.

I spent all of it in Northumberland as well, come to think of it.

Hornby Annie/Clarabel for the coach?

Shame about the museum in Birmingham... took the foster kids there in late 2015, it was good, friendly staff and seemed to have loads of potential- the kids loved it, especially the Scalextric track on the top floor which I had to physically drag the four year old away from... From what I've heard it closed because Birmingham Council happened to recalculate their business rates, and 'discovered' they had apparently been undercharging the museum, or charging them for a different property in error, then presented a demand for 18 months of vastly increased backpay which the place simply couldn't cover in the short time demanded. Such a pity, and I wonder what will happen to the displays inside? I'd heard the owners were trying to find someone to sponsor them so they could reopen, but closing a few weeks before Christmas must have been a gigantic kick in the teeth, especially for the poor staff and vols...

Check out www.doublearrow.co.uk - There's the full BR corporate identity manual to view online. Sheet 3/01/2 says that the white on blue as you originally did it is correct but that white on black or black on white with the logo in white on a red background can be used in exceptional architectural circumstances. This is dated 1965 and from memory I think the black and white version was used a fair bit later on but depending on the period I think you got it right!

Did you know that the BR lettering on the dark background was slightly smaller than the black on white to avoid the optical illusion of it appearing bold?

No I didn't. The signs are from the Scalescenes downloadable and editable set so I can't lay claim to them.