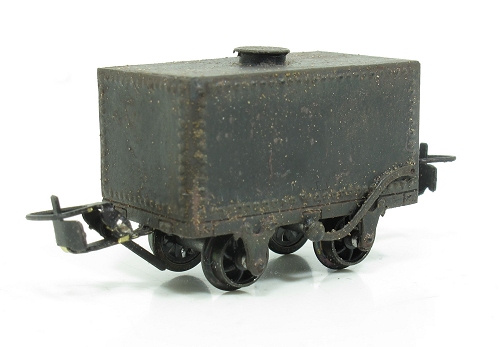 A cruel enlargement but at least you can see the finished water tank wagon in all its "glory".

Weathering was kept simple - the model was dry-brushed with Humbrol enamel tank grey (69), rust (70) and track colour (173). I worked quickly, not letting each coat dry. That way the colours merge a little so nothing stands out.

To finish, I experimented with Citadel Typhus Corrosion, a rust paint with texture. Paint on and wipe most of it off again. The stuff thins with water and so a wet brush will work most of it off, stroking downward to represent weather.

It's collected in the corners quite nicely and definitely added something to the tank sides. Lots of potential for the future I feel. 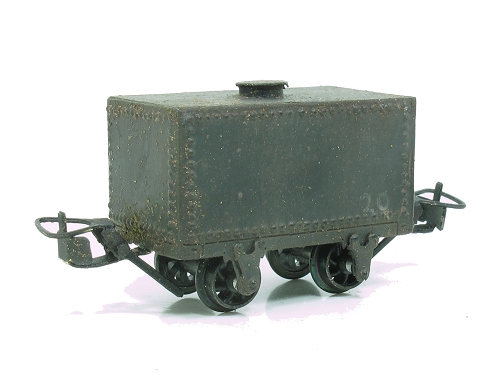 The only problem was the water-based weathering removed my carefully applied with a mapping pen, ink numbers. Never mind, they used to get weathered off the real thing too.

Couplings are Greenwich. They are supplied in the kit but I soldered them up solid so had to have a second go on a spare etch. The last job was to glue some lumps of lead in the tank as it weighs practically nothing.

Nice little kit and a pleasant project. You could really build it as a "Knightswork"  although I suggest that painting is another couple of hours spread over later evenings. For now, my model will sit in the box with the other 009 rolling stock. At least it's a kit off the pile!

Phil. Forgive the comment, but you seem to have assembled the Greenwich couplings partly upside down. On all those I have seen, and as I use them myself, the pivot is below the shank. Christopher Payne

Eww. that looks like the sort of grunge you get at the end of the siding where the wagons no-one really bothers about are kept until they are occasionally needed or fall to bits.

Chris - Are you suggesting I should read the instructions? Not in the era of Trump I don't...

Phil, Chris is right not only should the pivot be below the shank, but I think you've folded the end of the shank wing as well looking at those photos; the shank should sit almost at the top of the buffing plate. Also not sure why you mention solder as you don't need any to assemble the couplings.

I'm sure they'll still work but I guess they'll be at totally the wrong height to couple up to other stock.

In the plus side the weathering looks excellent!

I think I need to re-visit this coupling stuff. Mark's point about the shank wing would explain the extra half etch line I ignored. Now I think about it, I know what I've done wrong - I just don't know why I did it.

Still, we all make mistakes. I just do it in public!

Sorry about the spelling mistakes in my last comment, stupid autocorrect on my phone doesn't help make it particularly readable.

As for making mistakes in public, I think all of us who blog do that regularly, I know I do. It's useful though as we all learn something.

Sorry about the spelling mistakes in my last comment, stupid autocorrect on my phone doesn't help make it particularly readable.

As for making mistakes in public, I think all of us who blog do that regularly, I know I do. It's useful though as we all learn something.