'tis the season to start buying models installments, or so the TV and boxes of part 1's in Smiths tell me.

First up, we have Build the Back to the Future Delorean from Eagle Moss. 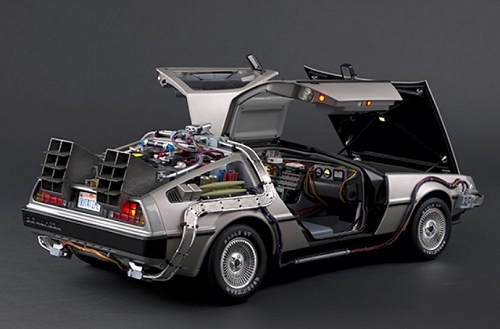 Over half a metre long, this 1:8th scale model is full of detail and covered in working lights. Easy to assemble with no more than a couple of (supplied) screwdrivers, in around 2 years you will be the owner of a really impressive miniature.

"Around" 2 years? I hear you say. Yes. Because interestingly, it's not obvious from the website exactly how many parts there are in this model - not even in the FAQ section where you'd reasonably expect it to be. Even the TV advert on-line doesn't seem to contain this info. The advert on telly does though (130 parts) and a quick calculation put the final cost at over £1100. That's an awful lot of money even if the finished product looks brilliant - which it does.

£124 buys you a model of the car about half the size over on Amazon or for those who like a plastic kit, Polar Lights do a 1:25 snap together kit. No lights on that one, nor on the Ashoma 1:24 version either.

Anyway, if you fancy a go, visit the Build the Back to the Future Delorean website.

With the latest Star Wars film out, now is also a good time to release a partwork allowing readers to build their own half size R2D2. 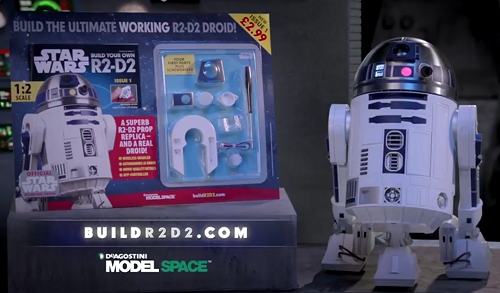 De Agostini are up front about the cost - 100 issues will cost you £893 in total. For this you get an easy to assemble robot that is motorised, illuminated, projects a "hologram", packs a camera and reacts to humans and control from a mobile phone. The late Kenny Baker has been replaced with some micro electronics, arguably making the model more accurate than the original!

The supplied magazine claims to be educational too, with articles on electronics and computing. Oddly, an electronic version is available. Surely this is superfluous as you are buying the series for the physical components of your model strapped to the front?

R2 has been available in model form for many years. Off the top of my head, I know there is an excellent 1:12 kit from Bandi, one of which is in my pile to be built. There was also a Lego version.  If you want it to work, then Hasbro have something, although it doesn't have the functionality of the partwork version. Real enthusiasts will find at least 3 guides to scratchbuilding a droid on-line.

Product information has been gleaned form the Build your own R2-D2 website.

Both of these models look great fun to build, I'm not going to spend that sort of money (I always dream the makers will decide they would like someone building one on a popular blog and send me one, but it never happens) on either. Given the money, I'd probably built a steam-powered partwork.

Having been bitten by the A4 partwork, with all it's quality issues, I can easily say I will never undertake a partwork project again.
The Heljan model at £750 is just salt in the wound. I know you don't have the enjoyment of building it yourself, but £450 in your pocket is not to be sniffed at, especially as that doesn't include the motor/gearbox assembly

The Barrett kits are very good, as I often tell you lol. You would love it.