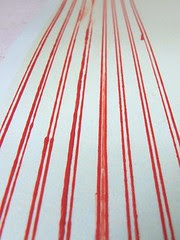 According to the book, the approved way of doing boiler bands on a model steam engine involved drawing the lines on some transfer paper and then using these home made decals on the model. Since I'm not in a position to disagree, and don't fancy my chances of running a bow pen round the boiler, under handrails and pipes, that's what I have done.

In my stock of stuff I had an unidentified A4 sheet of blank transfer paper. The bands were marked out as a series of dots 1mm apart. Than I took the bow pen that worked best for me and joined the dots with some nice red paint.

Working on the shiny paper made things difficult - on the finished body or a rubber cutting mat the paint is pulled from the pen. This doesn't happen on the paper as it's so slippery. The angle I held the pen at seemed to make a bit of a difference but the only plan that made sense involved making far, far to many bands and hoping I had enough good stuff to do the job.

Once dry I carefully cut the strips out and soaked then in water. The transfers seemed to take a long while to release from the backing paper and once off were very thin and difficult to handle. Once a band twisted on itself it was almost impossible to recover. Luckly I had almost twice as much bad as required even allowing for the duff early efforts that had to be thrown away. 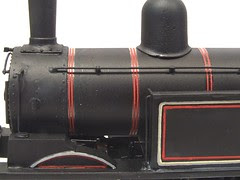 The end result is good. The transfer sheet gives enough thickness to represent the very thin strips of metal. Those lines look really good and once on the body could be poked around easily enough with a wet brush to make sure they were upright when viewed from the side.

One minor issue is in the kit instructions. Measurment are provided for setting the bands out but looking at the photos of finished model, these are wrong by a few mm. Follow these and the band comes out from under the dome when it should cross in front of it.
Posted by Phil Parker at 7:18 AM