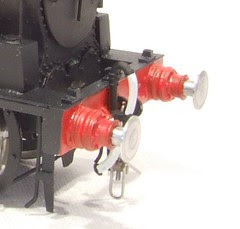 Buffer beam
Originally uploaded by Phil_Parker
Final push on the Coal Tank locomotive - fitting the buffers and couplings. There is something about this stage when the loco starts to look at it's best. Buffers are funny thing, some people get incredibly excited about them and will agonise for hours about the correct shanks for a particular model. Others (like me) are happy to have round things sticking out from the beam that have heads of about the right size. OK, so on a loco I can muster a bit of enthusiasm but on wagons ? Is it really that important ? Even if you have a tension lock in the immediate vicinity ?

Anyway, the buffers for this particular steam engine are the right ones according to the photos. Sadly, on the real thing they would be self-contained but on a model the springing requires a tiny shank sticking out through the back of the beam. Since this is sans hole, the retaining nut can only move in a very limited space - about 2mm I think. Mind you the springs in buffers rarely do much on a model and so a small movement ought to be sufficient and at least you don't get to see an unprototypical nut bouncing back and forth just under the footplate.

The couplings are quite a nice set of screws that can actually be tightened up should the operator desire and have nothing better to do. And have a screwdriver as the tightening is achieve with this... Still, they do look the part. Again the lack of space behind the front beam means this set aren't spring but Araldited in place. Curse the designer of the real engine who put as great void in front of the smoke box, leaving modellers with nowhere to hide stuff.
Posted by Phil Parker at 10:05 AM