Track down. Sort of. 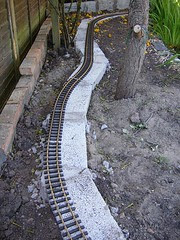 With the blocks for the track base set in concrete, it's time to put the track back. I thought I could remember how it all went but after several tries it became obvious that the exact positions eluded me.

In a rare moment of sensible pre-planning I'd taken quite a few photos of the construction from all angles. Reference to these, one the baking sun had moved to give some shade, showed me a fundamental long straight section was the wrong side of "the wiggle". Putting this in the right place and knowing where the short tunnel section was allowed the circuit to be built up without concreting over the whole garden.

Of course our marking out wasn't nearly as good as it could have been - as you can see the LGB track only just sits on the base. A little shuttering and extending of this will be a good idea so the ballast has something to stick too. And before you say it, we can't just twist the oval to get a better fit on this section, this is the worst bit, everywhere else is fine so that's the way it is staying. 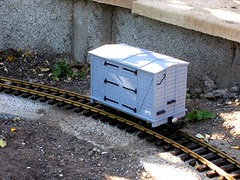 On the plus side, the levels seem OK. The first train, an IP Engineering WD box van, has been pushed around the circuit without mishap and it's pretty top heavy. OK, so this isn't much of a test train, it will be a while and many screws before one of the Isle of Man steam locos ventures out, but it's a start.

The best bit of the job is handling the LGB track. It's so lovely and chunky. Far better play value than finescale indoor stuff.
Posted by Phil Parker at 8:08 AM