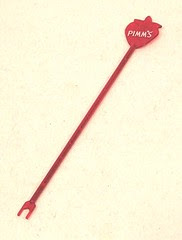 Modified swizzle stick
Originally uploaded by Phil_Parker
Overlord uses Spratt & Winkle Mk2 couplings. Unfortunately when the layout was built, no uncoupling magnets were installed so all operations are manual. Over time the amount of proper shunting has increased - originally the layout was run by moving entire trains around the various sidings and never disconnecting locos from stock. To achieve this various sticks and brushes are pressed into action.

In my non-drinking state last weekend I ordered an orange and lemonade, which came with a swizzle stick to mix the two ingredients. Looking at the stick it occurred to me that this would make a more colourful uncoupling stick than the coffee stirrers we had been using. Back at the layout the next day I clipped the points from the end of the stick (Pimms intend these to poke through strawberries I think, not that I'd know, you don't get them in beer) and the resulting saddle, when poked over the coupling hooks, depressed them nicely so the loco could pull away and leave the train.

I don't think this would work with my favoured Mk1 Spratt & Winkles as the second over-hook of the Mk2 doesn't catch in the same way the simpler Mk1 would. I will test this though as this isn't unlike a doofer, just bright red plastic !
Posted by Phil Parker at 7:20 AM