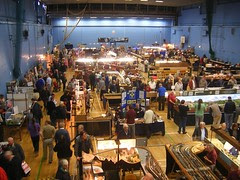 Trainwest 2009
Originally uploaded by Phil_Parker
"Phiiiiiiil, I'm short of operators for Trainwest in a couple of weeks, do you fancy helping out ?"

And that is how I ended up spending a weekend behind Chris Mead's layout, Overlord, last weekend. We expect it to be popular after the Hornby Magazine photos appeared a few days earlier. For those not familiar with this particular model railway, and since it's been trundling around the exhibition circuit for 15 years you probably have seen it at a UK or even European show, it's a 40 foot long model of Southampton docks in the run up to D-Day. If you still can't place it, it's the one with all the big ships on the front and tanks everywhere else. For further help, go and buy the magazine, the photos are really rather good.

Anyway, we met up at Chris's house and emptied pretty much all the contents of his garage into the back of a long wheelbase, high roof van. The only things left were the washing machine and freezer - plus a few boxes full of stuff we didn't think we'd need. The route to the show was simple enough - follow the Fosse Way for about 100 miles. On the way there were a few interesting sights to be seen including several Cotswold towns and an airfield with surprisingly large passenger planes in the middle of nowhere. 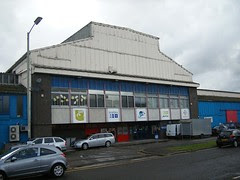 Airfields seemed to be the theme of the day - the show is held in the Christie Miller centre which looks like a converted factory unit flanked by old hangers. I'll be honest, it's not a pretty building. The local authority obviously took the opportunity to convert it and save building from scratch. Inside it's much nicer and the exhibition is held in a single large hall with a nice flat wooden floor.

We found our spot and set up the layout in about an hour and a half. The model was built in two stages. The newer boards are 5 feet by 4 feet, these are a bit unwieldy but manageable by one person using a sack truck. The benefit is that you very quickly have a lot of model railway assembled. The older section comes as conventional 4 by 3 boards which are paired up for transport. These assemble two deep which means lots more joins and bolting up. Even so, with 5 of us, progress was swift. One exciting new feature was a set of lighting gantries nicely made and promising even illumination over the whole model as well as supporting a glider and tow plane.

This would have been a lot better if the light bulbs, some fancy halogens ones, weren't back in the garage 100 miles away. Still, the lighting in the hall was pretty good and we still put up one support for the flying display.

Construction was aided by a delivery of fish'n'chips arranged by the club and by the time they arrived we were able to sit back and take stock. Everything was up and sort of working. Some of the new point motors from Guagemaster seemed reluctant to operate. My feeling was that the long lay up between shows didn't help as they were trying but not reliable. The WD40 was also in the garage but some spray lubricant was acquired and used which helped a bit. The bomb-proof H&M's on the older section of course worked fine.

Anyway, we couldn't do more so headed off to the digs which were 9 miles away in Chippenham. The New Road Guest House was lovely. Comfortable and in the centre of town making it handy for local refreshment. Don't listen to the landlady for pub recommendations though - the first was for a small place directly opposite which we were assured was quiet and had good beer. On entering the gate we could hear music. Punk music. By the time we'd got to the bar we'd worked out that it didn't matter how good the beer was, we were all 20 years older than any other customer. The only advantage being that we knew how stupid their clothes looked !

The New Inn up the road was much more suitable. It's tiny but does a nice Abbot Ale. There we relaxed and pondered the point problem. After some thought we think the issue is the thin wire used for connections. All that is required is for this to be replaced by something fatter and the full complement of oomph will be supplied to each solenoid. This wasn't a job for the weekend though.

Tomorrow I'll write about the show itself. For the moment, content yourself with some photos I took.
Posted by Phil Parker at 8:36 AM