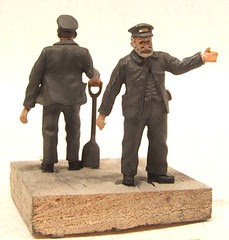 7mm scale locomotive driver
Originally uploaded by Phil_Parker
A steam engine needs a crew and the coal tank is no different. Finding footplate figures ought to be easy but I've often found the quality to be a bit iffy. In 4mm scale you are probably best off with the Monty's Models figures or the Alan Gibson ones if you can get them. Of course if you've lots of locomotives this could get a bit repetitive !

In O gauge I've plumped for Phoenix Miniatures sold by S&D Models, numbers OF23 & OF24 at £3 each. Both are excellent quality models which are a real pleasure to paint. Carving figures is probably the most difficult job you can undertake in railway modelling - if you want them to look right and not cartoonish anyway. I think Phoenix have a background in military modelling which shows. Those guys are pickier than railway fans in this respect. Some assembly of the pewter parts is required, the arm on the driver and arm and hand on the fireman which I carried out with superglue. 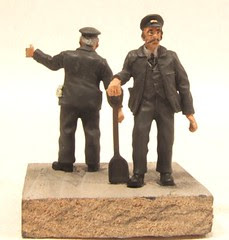 Painting followed my well worn methods - flesh from Humbrol and then dry brushed with Revell. waistcoats are dark blue or dark grey. Overalls are Precision Weathered Black. When this was nearly dry I covered it with talcum powder to take the shine off and then worked black powder paint into all the crevasses. Although the waistcoat colours became less obvious I think you can just about tell.

Finally the hair (head and facial) and eyes were done with a tiny brush. I like the moustache and bear, they were compulsory on railway worked in the early part of the 20th century as far as I can tell from photos so they give the crew the right look for a pre grouping locomotive.
Posted by Phil Parker at 8:05 AM

I like the black powder-paint idea. Do you use it as paint, or just as powder?

As powder. I brush it on with a soft brush and then work it off with a stiff one. I suspect a black weathering powder would work in the same way but powder paint is cheaper and I have a pot of it !