Cat on the line 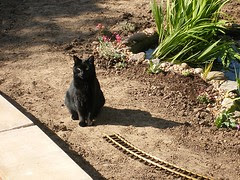 Earlier this week the sun was shining so I decided to try laying some track on the garden railway. The plan is to lay a concrete base underneath it so we need to work out where it's going. A solid foundation is essential for the long term life of the railway. No bits of wood, marine or otherwise, for us ! Of course the pile of leftover concrete blocks that we over ordered may have influenced the decision...

Anyway, the first thing to establish is the position of the curve nearest the house. This is going through a tunnel which will be under a rockery. And the stone and waterfall for this are one of the largest material piles left. Rather than a smooth curve, the subterranean bit will be straight.

Having plonked this track in place it made sense to try the rest of the layout to get a feel for the job. At this point a problem appeared in the shape of Minty. She sat in the path of the railway and stared at us. And refused to move. When eventually persuaded to vacate the site she dug up some of the nice soft earth in the raised bed, and did what cat's do.

Swampy would be proud.
Posted by Phil Parker at 8:03 AM