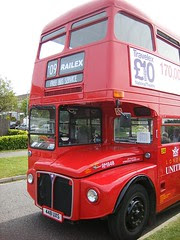 Big Red Bus
Originally uploaded by Phil_Parker
On paper this looked like a good show - and in reality I wasn't disappointed.

Chiltern Railways run as far As Aylesbury with a change and excellent sausage sandwich at Princess Risborough. The next step is onto a big red vintage bus for the final leg to Stoke Mandeville Stadium. Full marks to the bus owners too as this was one of the best condition vintage buses I've ever been on. And it was free.

Inside the show (£6.50 since you ask) there were 80 stands. Yes, 80. First layout seen was Beachley Dock - 7mm scale dockside shunting layout from Holland. Now this is an excellent model but am I the only one who finds the name "Modelspoorteam" amusing ? Yes I know it's Dutch and everything but it's still funny.

There's not great show review this time because that's not really what I went for. No, I was chasing up trade reply forms from people who have been invited to next years Leamington Show. It's bigger than Railex as well. 30,000 sq ft as opposed to 20,000. Not that size matters or anything. And I know I could have done all this by 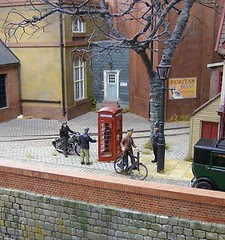 phone but the personal touch is much better and I get a nice day out with a train show so why not ?

I'll be honest I hadn't planned to buy anything at this one. Oh, I was tempted. Dragons Models do a very nice model of Rocket in 7mm scale. £275 all in and it's a beauty. Pretty much made up of lost wax castings, I have no use for it but would still like to build it. Judith Edge kits of course have a range I would like to build, especially the early LMS shunter. High Level call with their range too - I've built a couple and have another in the cupboard but there are still the diesels to do...

As it was my bag arrived full of show leaflets and came back full of books. Cheap ones mostly but books all the same. The Hythe Pier Tramway by Peter Harding is particularly good.

As for the layouts, well most I liked and some I didn't. There are some amazing projects out there - fancy having he audacity to model Liverpool Lime Street Station for example. Personally I'd rather have seen it after a couple of years extra development but I suppose after putting in as much work as has obviously been done you need to show it off a bit to encourage the group to carry on. 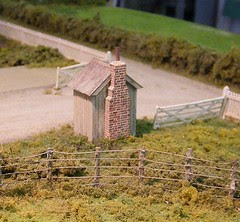 Of course I prefer the little layouts - which was good because there was a lack of big roundy roundy models. And some of the details grabbed my eye. If I were to award the "Layout Phil would like to build" prize, it's going to either Lydham Heath, Catcott Burtle (crazy name, crazy builder) or West Harptree. The later not in GWR obviously but 12mm gauge 3mm scale is very good. And it did work well.

I originally went to this show because it was recommended to me by a friend. He wasn't wrong, it's well worth the visit. I spent around 5 hours in the hall, didn't stop to eat and spent most of the time chatting to people. That's a good day out.

I didn't take many photos but those I did are here.
Posted by Phil Parker at 7:41 AM