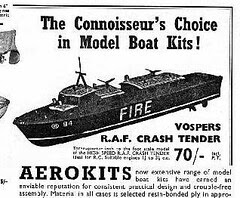 Ross writes: I was interested to see an RAF tender,(boat) on your site,just the sort of thing I'm looking for,to get back into sailing models,after an absence of 20 years.I'm not a builder as such so I'm looking for something scaleish around 60" max, and ready built,I do have the radio gear!

Although I live in Stroud in Glos,I would be willing to travel if the right model came up.I'm hoping you may be able to suggest somewhere to look, or someone to ask perhaps,other than ebay. I've found nothing really suitable up to now.

Ready built boats come in various forms. To start with the most basic, there are plenty of ready to run (RTR) models available from various vendors such as Howes. They are cheap and you can just charge the batteries and launch them on the water. In recent times the quality has improved and they look a lot less plasticy. However, the downside is that the radio gear is rubbish. It will be described at 27mhz - much like proper gear but (and it's a big but) proper gear splits the bandwidth up so several boats can sail at the same time. Your Chinese RTR model will swamp the entire frequency, fine if you are on your own and a long way (1/2 mile) from other modellers but should you want to sail in company then don't be surprised if they chuck you in the pond for crashing their boats ! I did say you needed to be half a mile away unless you can run very fast...

Oh, and don't think you can easily change the radio gear to the good stuff you have either. Taking one of these models apart and doing this is often harder than building a nice simple kit.

Moving up a bit, if you can track down any of the "Thunder Tiger" range of boats then take a good look. We've got a couple of these and they are pretty good. The radio gear and speed control are the same as in "real" sets and you can sail with other people as long as you check the frequencies in use - there will be a board with these on if you are at a club. Supplies are dodgy at present, the models were being sold off late last year so it may be the range is being discontinued.

Up a bit further and you need to talk to Deans Marine who import a range of scale nearly RTR models which look impressive. That Wavney lifeboat is particularly good and not at all annoying when compared to the Billings kit I have in the cupboard. Oh well, I'm sure mine will be more satisfying when done...

After this you could do worse than keep an eye on the radio control boats section of eBay. Second hand complete models come up on a regular basis and often sell for less than the price of the kit they are built from. OK, so it's a bit of a pig in a poke as you have to gauge the quality of workmanship from the photographs and once bought, there is nothing you can do about it if you get a duff one. Having said this there are lots of bargains to be had as long as you aren't too fussy or are happy to wait for the right model to come along. Model boats are a pain to ship (pun intended, they always are) so if you will travel you'll stand an even better chance of getting a good 'un. You might even get lucky and get and Aerokits model of the RAF tender - these are popular and the kits have long been out of production though.

After this, you can try talking to other model boaters. Start with Model Boat Mayhem Forum which is probably the largest on the web. Lots of modellers there and that means quite a few who will be looking for good homes from excess boats from their own fleets. There is even a Sales & Wants section. After this head over to the Model Boats Magazine website which offers the same sort of thing along with lots of interesting articles.

Of course if you have money to burn and want a particular boat then you could commission someone to build a model. I could do a fire boat but be warned that paying for someones time isn't cheap and model boats take a long while to build. Figure on a months work for a decent usable largish model and you won't be to far wrong.

Finally though, my number one suggestion for finding a boat - your local model boat club. In your case, try Gloucester & District MBC. As well as being a good source of second hand boats the members will let you have a go with various models so you can refine the sort of thing you are looking for. Most clubs don't insist that you actually have a boat when you join - in fact most of our members seem to spend time chatting rather than sailing !

Good luck with your search.
Posted by Phil Parker at 8:41 AM