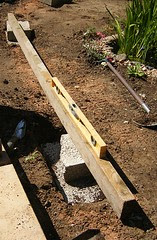 Levelling
Originally uploaded by Phil_Parker
A nice day gives me a chance to make progress in the garden. For the last week the entire circuit of track complete with passing loop and siding has been connected up and laid on top of the earth to see what it looks like. For some reason the LGB track allowed an asymmetrical plan - not sure how but there doesn't seem to be any problem with slack joints which is what I'd expect.

Anyway, some soft dry sand was trickled over the track and the later was removed leaving the sand to mark the spot. We had to be careful not to stand on this or brush earth over it, not easy as there isn't a whole lot of space around.

Anyway, next it's time to find some levels. Burying the first block and using this as a datum was the plan. Two more blocks were tried and we pretty quickly found that the datum needed to go down several centimetres or everything else would be running on an embankment. With half a dozen blocks in there is still about 2cm difference over the circuit but I think the locomotives will handle this OK. We will be trying a billiard table loving Mamod or two but mostly it will be electric and this has a bit more grunt.
Posted by Phil Parker at 7:47 AM