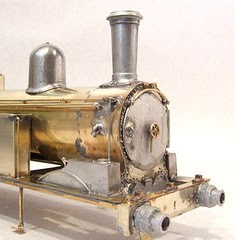 Front end complications
Originally uploaded by Phil_Parker
The front of the coal tank is looking suitably complicated now but has thrown up a mystery. On the left hand side (looking at the front of the locomotive) there is a sandbox operating lever. The rod to work this appears to run through the handrail - a similar system is used on other steam engines so this isn't that unusual.

According to the kit instructions the linkage only appears on one side only though. Presumably there is a hidden mechanism in the smokebox or under the footplate to work both sides simultaneously. This would make sense as you'd want to do this and certainly wouldn't fancy working levers on both sides of the cab at the same time if at all possible. When sanding is required, the driver really needs to concentrate on the regulator rather than flailing around like an octopus.

Of course photos would clear this up but there are very few of this engine in original condition and those that there are are inconclusive or even contradictory. That's one of the problems with modelling pre-grouping and one of the benefits - there is less chance of being proved wrong !
Posted by Phil Parker at 7:09 AM