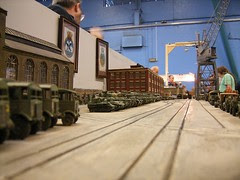 Any day that starts with a headache is bad. In this case it was distinctly unfair too. 2 pints of Abbott shouldn't cause a hangover even for a lightweight like me.

Breakfast at eight allowed me time for a quick stroll around the town centre first to try and get better. I made it down to the impressive Brunel viaduct at the bottom of the hill before needing to return for a rather good full English and tea. This helped a little and I survived the drive back to the hall despite being squashed into the back of a Renault with two other adults and a driver who thought he was navigating the Arc d'Triumph. The car appreciated it as bit less – we thought the occasional rubbing noise was the rear mudflaps touching the road until on arrival we discovered there weren't any flaps at the back.

The layout was still where we left it so the day started with track cleaning. A Peco rubber carved into a diamond shape did the honours – the shape helps get at the rails as nearly all the trackwork is buried tramway style, in plaster. So buried were some of the recently completed bits that a little screwdriver was needed to chisel down to the metal. At least we knew it was clean !

The doors opened and in came the crowds. Quite a lot of them, in fact nearly a thousand over the day. There were people the length of the layout and we did our best to keep things moving to entertain them. The point motors had woken up which was a little surprise as the one thing everyone agreed on about the hall was that it was COLD. In mid May you don't expect to need the heating and even with it on the high roof meant that the warmth took a long while to reach us.

Looking around was difficult so we didn't get to see much before lunch. Afterwards things thinned enough to get out a have a gawp at other layouts and perhaps buy the odd souvenir from the trade. When we escaped our railway it became apparent that despite being on the more expensive side to get in (£6.50 for adults) compared to many shows, you could see where the money had gone. 33 layouts and not a bad one in there. In fact several of them were absolutely superb. It's easily one of the best shows I've been to for quality and anyone should have found something that pleased them immensely. Had I been visiting I'd have wanted to get there early to get a good look and left feeling I had had top value for money.

Some of the highlights for me were:
Rowlands Castle (4mm, OO) – a wartime layout (you might have thought I'd had enough staring at tanks all day but no) showing a typical village in the south east. The quality of modelling was very high and the attention to detail most impressive. The tanks on the village green awaiting the drive to the docks standing on crushed bricks so as not to sink into the mud. Signposts were piled up with the names painted out. All the windows were taped up in case of bombs. The troop trains had people hanging out of the windows – all just as you see in contemporary photos and films. 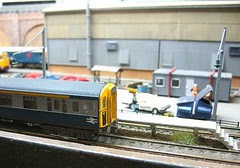 Stoney Lane Depot (2mm, N) – A slice of 1990's London. Electric trains run along a viaduct over the top of a depot. It sounds dull but isn't. I have no interest in EMU's but this looks like a real view in the capital. There is loads of movement in a small area but none of seems forced or contrived. Excellent modelling in this tiny scale.

Willowbrook Marsh (7mm, O) – This is probably the layout I 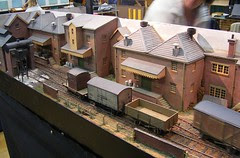 wanted to build. Minimum space O gauge has always interested me. Perhaps a bit “quart in a pint pot” but only just. By modelling a good station and eshewing passenger stock the scene looked good and provided lots of opportunity for action.

I could go on all day but to be honest can't remember every layout and even over two days didn't have time to see everything properly.

Of course we spent most of our time behind the barriers and good fun it was too. Overlord isn't too demanding to operate because most people seem more interested in the spectacle of the boats and military stuff. Sure, we shuffle things about but only because we feel we ought to. A few mentioned they had seen the model in Hornby Magazine, at least one mentioned it in a way that suggested he thought we might not know it had been photographed ! In fact it probably didn't need a proper shoot at all – just gather all the images taken over the weekend and by the law of averages you ought to end up with enough decent ones for an article. If we'd remembered the light bulbs (and the tow lorry for the barrage balloon and the WD40 etc.) they might have even been properly lit !

Not everyone's operating sessions went quite as well. We backed on to a 4mm narrow gauge layout of monumental proportions. The owner used a small electric buggy to get around. He was very nimble on this and zipped back and forth quite happily despite the space between us being filled with table, chairs and the odd corpulent operator. Three times during the day he managed to get the reversing a bit wrong and clobber the 4-way block supplying the layouts with electric juice. Each time he managed to hit only one plug – his own – in the middle of the others and pull the cable out from it plunging his model into darkness and upsetting the DCC . Three times. Only his plug. I'm not sure if that counts as lucky or unlucky. Whatever, the 4-way was taped down under a table the next day...

You'll also be pleased to know we didn't starve. Saturday lunch was a ploughman's served by a slightly exasperated and very hard working member of the leisure centre staff. The biggest surprise was the cheese. It was very nice, as cheese goes (I'm not that fussed), which was good as the chunk on the plate would have kept most people going for a weeks worth of sandwiches. Most of us were beaten by the quantity, all except for one of the club members who managed someone elses portion while waiting for his to arrived, ate this and then started on the leftovers from another friend. Maybe he had mouse genes...

Saturday night saw us in a faux Wetherspoons where there was good food, a desert called “Berties Belt Buster” that we were more than man enough to handle and some reasonable beer, except for me as I hadn't felt better until mid afternoon so skipped the stuff. By around half nine we realised that everyone else in the pub was many years younger than us and slunk back to the New Inn where the landlord treated us like regulars and nearly poured 5 Abbots until the order was reduced to 2 and a diet coke.

Sunday I felt better and headed down the station. It's very nice even though the tracks have been dramatically reduced. The railway club has it's premises in a weighbridge come warehouse on the edge of the car park and used this to good effect to hang a banner where all the commuters could see it.

The show was as expected for a Sunday, quieter and we manged more looking, a bit of layout and trader booking for our own show and more operating. With access to the stands a bit easier I rummaged around under one and bagged several plastic bags of very nice 4mm scale screw couplings for 45p for 6 pairs. They will be adorning new locos in the future. The local cheese supply had been exhausted too so we ate bangers and mash for lunch served by the same girl who had learned that it was OK to boss the crowd around a bit and had gained an assistant. It was cheesecake for desert mind you. Perhaps its the national dish of Chippenham.

Packing up took just over the hour including loading into the van and since Chris and Tim reckoned they could put the layout away on their own (actually we were told we'd be in the way) I was back home stunningly early. A good weekend was had by all, exhibitor and visitor alike.