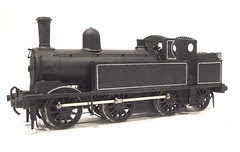 Grey lining
Originally uploaded by Phil_Parker
Here's a job I've been putting off for a few days. Lining. Obviously this was to allow the black base coat to dry properly rather than through any nervousness about the task...

I'd promised to try to paint this locomotive in full LNWR lined black. That means a grey line, red line and then inner cream line on the grey.

So I broke out the bow pen and a nice fresh tin of Humbrol 64 and had a go. It won't suprise you that I re-read the relevant sections of Rathbones' book on painting and lining first.

A piece of mircostrip was selected to act as a jig for marking the centre of the line. I used this against all the edges to ensure consistence. Just a little pencil dot showed up well against the sating black paint.

With some trepidation I thin loaded the pen and started work. With care I think the results aren't bad. Maintaining a constant rate of travel along the line with the pen seems to be the most important thing. The straight lines actually went on very fast.

The corners are brushed in with a tiny Humbrol paintbrush. Then the tidying up starts using the same paint, from the same can , that the engine is sprayed in. This is the bit that you don't get to hear about normally but according to Rathbone, is important - even the professionals don't get everything on exactly right first time !
Posted by Phil Parker at 7:42 AM