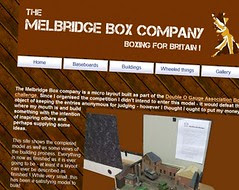 The Melbridge Box Company is heading for an appearance in a proper model railway magazine very soon. This made me think it was about time the the web site for the layout was updated. Originally checked together very quickly to give me somewhere to dump some construction pictures, it was looking very, very dated. Besides, I have done web stuff professionally in the past so a site as basic as this wasn't doing me any favours.

A few hours work and the site looks rather more interesting. OK, so most of the content hasn't actually changed that much - all the stuff about construction was pretty good. The text is now written in the past tense, when I built the site the model was still under construction and my intention had been to update it as I worked - like many best intentions this didn't actually come off but then the speed I was working I didn't have time to fiddle with web stuff at the same time. Or at least that's my excuse.

Anyway, never mid reading about its, head over to the web site, then come back and tell me what you think.