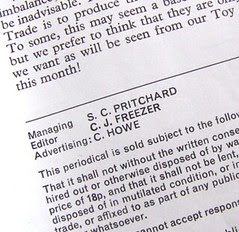 Cyril edited the Modeller during arguably it's greatest period - the days when people actually made things. Old issues are full of articles about taking basic materials and making a model railway, the sort of things I love to read about. Obviously the world has moved on, the period spans the end of wartime austerity to the serious emergence of quality RTR and finescale modelling, but I'd happily give shelf space to a mag from this era.

On top of his magazine commitments, which also included contributing to several other publications, he was author of many books on railway modelling. My layout even appeared in one of them - First Steps in Railway modelling. The title pretty much sums up Cyril. He wasn't elitist, preferring to get people involved in the hobby at any level. Much of his work was very inspirational, the famous Peco plans for smaller layouts book can be found on most railway modellers bookshelves and recently there has been some fuss over the 50th anniversary of one Minories, one of the plans within it that has inspired many a layout. 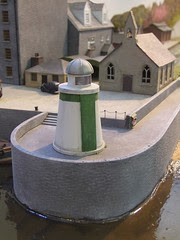 On a personal note, I met Cyril many times at exhibitions. He is responsible for the scenic extension to our 3mm scale layout, Flockburgh. During a very early appearance he look at it and suggested that the display would be much improved if we added some scenery beyond the end of the station. We took his advice and built a short section of dockside and it has changed the feel of the entire model for the better.

Cyril will be missed a lot by this hobby.
Posted by Phil Parker at 7:37 PM

I agree that CJF was an inspiration. I was disappointed when he left Railway Modeller (in 1978, by the way, not 1980). But the move improved both publications: Railway Modeller's design was invigorated, while he brought a new urgency and debate to his new domain, Model Railways.