One of my friends says that my life seems a bit "random" sometimes. She's right. A few months ago, I received a request for some cork boats for a wedding.

After a little e-mail discussion, I  found myself having agreed to make up some for Matt Cox and his bride to bes nuptials. They were to be used as table decoration, sailing in goldfish bowls on the tables.

Matt had spotted my posts about the Cokyn-Baba boats we tried a couple of years ago at the boat club. The wedding was to have a nautical theme and so I was the man to decorate the tables!

Anyway, he required 8 boats so I set about acquiring materials. The hulls are cork sanding blocks cut in half and shaped by hand using a surform. Beware if you try this, not all blocks are the same. Cheapo ones from Wilkinson are less dense than pricier versions from a proper hardware shop.

The original sails were from very thin plywood, supplied cut ready to use by a gentleman who wrote the models up in Marine Modelling magazine. I didn't have and couldn't find such thin and stiff wood so 30 thou plasticard was substituted. It has the advantage of not needing painting. The sail sizes were taken from my original boat but I rounded off the corners a bit as there would be children and drunk adults poking these things and at the time of manufacture, one council had deiced that triangular flapjacks were a potential deathtrap, so I thought "better safe than sorry".

The keels had also been supplied in the past but I made my own from a bit of sheet steel in the garage. Some aviation snips and a bit of filing did the job followed by a coat of Smoothright so they matched the sails.

All done, the boats were passed to a relative who was going to the event. Admittedly I interrupted a game of petanque to do this but it was cheaper and easier than posting. A few weeks later, I received some photos showing the boats in use. Apparently they went down very well. In fact one of them was purloined, so who knows where it has ended up? 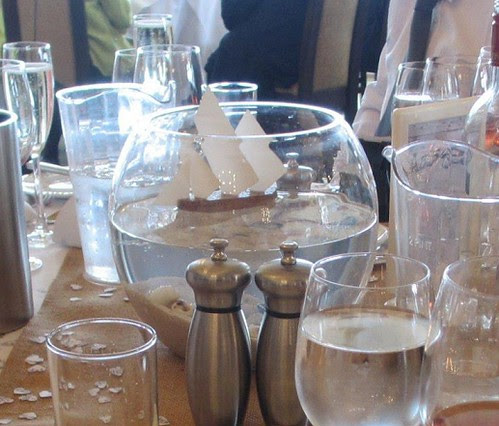 The boat looks lovely in the bowl doesn't it. Lovely theme and it's nice to have moving centrepieces on the tables with a bit of play factor. I bet people remember them for some time to come.

Awesome! Must have been a nice change for the usual commissions.

They were fantastic! We still haven't found the miscreant who stole the 8th boat... but we only have 1 in our possession now anyway as all of our families requested one!

Excellent - I hope you and Mrs Matt are in for a long voyage.

Glad to know that my design. is still going strong since the article in MMI 5 years ago and that Matt's family enjoyed them. I used them for my own son's wedding a few years ago as 'kits' on the table for children to make and sail on a pond outside the wedding marquee. There will be a follow up article in MMI in a few months time with slightly bigger Cokyn Babas - models of ss Great Britain, Cutty Sark, RRS Discovery, HMS Warrior, HMS, Gannet and HMS Trincomalee. With this in mind you'll need bigger goldfish bowls next time! All best wishes. Alistair.

Alistair - That's an issue of MMI that I KNOW I will be buying!