Models from the cupboard: Class 24 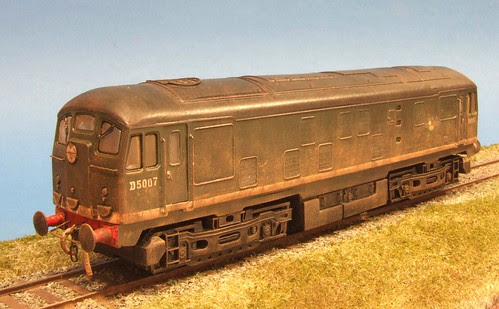 Digging out the contents of the kit cupboard the other day, I found a box containing a couple of old model engines I'd built for Melbridge Town, our unsuccessful attempt at a roundy-roundy layout. Since they represent a time long ago when you had to do some actual modelling if you wanted a nice realistic engine.

Today's example is a Class 24. The basis for the model is a Hornby Class 25 - reasonable enough as they are basically the same engine with a few cosmetic tweaks (cue frothing from diesel fans). The work was carried out using Craftsman Models DK9 conversion kit.

My model was picked up from the club second hand stall. The previous owner had fitted it with Ultrascale wheels set to EM gauge. It ran nicely enough so seemed a good basis for the work. Remember that at the time, I was aiming to fill the layout with unusual locos and a 24 would be just that.

The conversion wasn't entirely successful - I think the body sits a bit too high. Worse, this is probably my duffest weathering job with the dry-brushed dirt looking exactly that on the bodyside. This was long before I owned an airbrush and so a light haze of muck was beyond me. The bufferbeam is nice though and I even made a U-shaped Spratt & Winkle coupling loop.

Anyway, for the moment it is back in the box but maybe one day I'll tickle it again with some nicer dirt and tweak the body height. Other suggestions welcome.
Posted by Phil Parker at 5:30 AM

I've heard suggestions that the Hornby models are a better shape than the Bachmann versions despite their age.