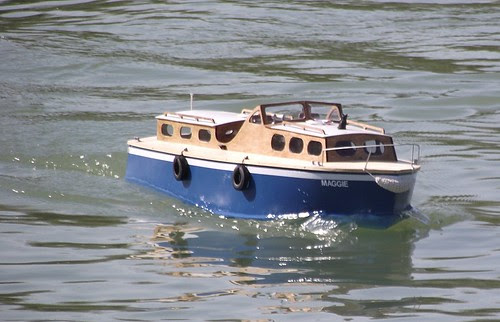 On the water, my Dad's completed Wavemaster model boat looks the part in the sunshine.

Built from a Vintage Model Boat Company laser-cut wood kit, it's constructed largely as intended by the manufacturer. This one has been completed as a Norfolk Broads style cabin cruiser, something my aged parent remembers holidaying on once. This means there will be none of those nose-in-the-air antics that you see in the website picture. Powered comes from an electric 540 motor rather than an ED diesel.

Detailing involved cutting out each window to flush-glaze them rather than sticking the plastic sheet behind the holes as most will do. I'm told that it's a fiddly job and takes time but the effect, especially around the windscreen, is worth it.

The rails on the bow are soldered up from brass wire. Inside the cabin you find the captain and steps down to the front and rear cabins. 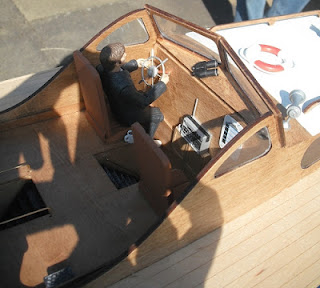 (Sorry for the dodgy photo, it was a bright day)
On the water, it's a lovely boat to sail. A 2-blade 35mm prop provides slightly more than enough speed. Earlier attempts with a 40mm 3-blader saw the motor smoke but it seems to have survived. I'll drop a 555 motor in when it gives up the ghost.
Definitely a pootler rather than a speed boat but exactly what its builder wanted. There were some "interesting" moments in the build - forcing the skins around the hull took a bit of work and one or two slots don't align with their tabs - it is a lot of boat for the money. Those niggles certainly haven't put him off, another kit from the same company is on the bench as I write.﻿
Posted by Phil Parker at 5:30 AM

Don't worry - we've been model boating for a few years now. It's a pleasent change from railway modelling occasionally. No presure from show deadlines, operating by a nice sunny lake rather than in an windowless hall. There's some interesting cross-over too.

Still lots of railway projects happening, some of which need to remain under wraps for the moment.