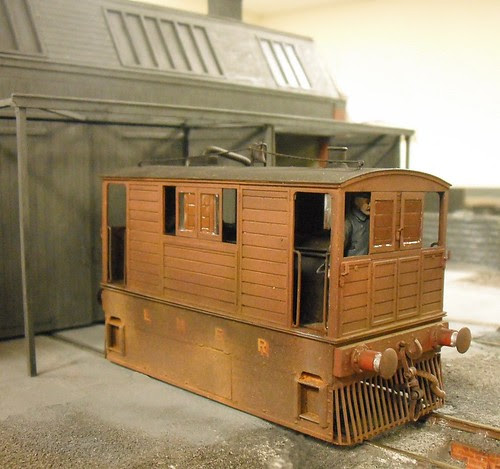 Another one for the stockbox. You might have spotted when I mentioned the glazing yesterday, that the body had been weathered. This is down to a spray of various Lifecolour paints that I'm testing for a project. Since the prototype ran alongside roads, I'm assuming that the dirt clinging to it would be lighter than the dark brown stuff that covers everything on the railway. Perhaps I've gone a bit orangey with the rust but this is fix-able later if I decide I don't like it.

Sharp eyed readers will spot a slight problem with my choice of driver. He's looking out through the central woodwork at the end of the cab. I can't move him easily so there will be some searching trade stands to find a replacement. This figure will be transferred to other duties, probably another loco at some point.

Thanks must go to the L&WMRS O gauge team who let me use their layout as a backdrop. Pete even switched off the evil DCC in the shed area so the motor stopped buzzing while I took the photo!
Posted by Phil Parker at 5:30 AM

Thanks. Now what shall I do next. Hmm, if only I had some more kits to build...

Nice build Phil, but I think you are right about the weathering colour.
A little too orange if you don't mind me saying.
A bit of grey "road dirt" might not come amiss.

I think some dark grey and a dose of track colour might help. The loc hasn't gone into the stock box yet and if I pick up a new driver figure at Railex this weekend, I'll perhaps re-visit the model and sort this. At least it's fixable!

Your comment about looking for more kits to build could be rather dangerous.

If you're not careful, you could end up with some readers of your blog offering long-forgotten kits from their stash, to "help you out".

Hmmm. I have a few of my own awaiting building and gave up building models professionally a while agao. In fact there's still a Garratt outstanding in that pile.

On the other hand, never say never...