An article in a model railway magazine where most of the action happens under the baseboard? Can it be true?

Yes it is. This month in Hornby Magazine, I'm making the points change on Clayhanger Yard by building a manual point operating mechanism.

Plan A for this involved using bicycle spokes but it seems that if this ever happened in real life, this was back in the days of penny farthings 'cos now I can only buy something capable of reaching a third of the way across the baseboard!

Parker's Guide this month involves hacking up some lovely Hornby resin buildings. Regular readers will know that I see these things as raw material rather than finished models and so it is here. Both a station building and goods shed see the attentions of Mr Saw. I've opened them up and scratchbuilt some interiors, something that's really worthwhile as when you see open doors on a model, you feel the urge to peek inside.

It's not all inside work though, there's also a canopy made from Airfix bits that caused me a fair bit of head scratching. The end result isn't bad though, and far cheaper than a kit version. 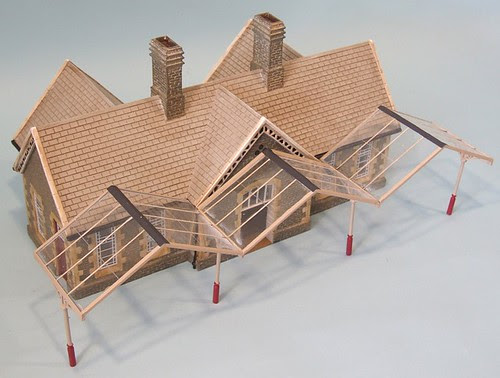