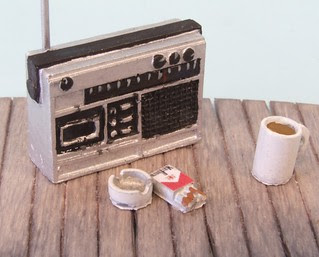 My Dads boat is nearly finished and he passed a detail pack from Macs Mouldings over to me for painting.

The resin items are quite nice: an old fashioned (to da kidz nowadays, but just how I remember them when I had one to load programmes on to my ZX81) radio/tape player, clipboard, mug, binoculars, ashtray and packet of cigarettes.

These last two gave me pause for thought. I've never smoked, never even tried to. As far as I'm concerned the smoking ban in pubs means I don't have to spray my clothes with Fabreeze after a few beers. If you look at TV and films these days, characters puffing away are rare and those that do are usually baddies - smoking being directors shorthand for "a wrong 'un".

Look back a few year and things were very different. Everyone smoked, even the Thunderbirds puppets. If you wish to build a realistic model, cigarettes are part of the deal. To modern eyes though, they seem anachronistic.

Anyway, I painted the parts up, including the fags and even stuck the paper label on the packet. The ashtray is filled with grey weathering powder. I didn't feel good about doing it though. Slightly grubby if you see what I mean. Maybe realism isn't everything.
Posted by Phil Parker at 5:30 AM

Now that you mention it, I was in a Hobby shop the other day that sells model touring sports cars from the 70's and 80's, all had full sponsor paint work sans cigarette brand names, The colour scheme minus the font. It seems to be a little too politically correct and interferes with the historical aspect of the prototype. And I don't smoke.

I wonder if the lack of brands is a licencing issue? You have to agree terms to recreate the detail and wording. I know what you mean about looking strange.

Oddly, I wouldn't have a problem with the ads, just the product itself.

... I didn't feel good about doing it though. Slightly grubby if you see what I mean. Maybe realism isn't everything...

Isn't it interesting how behaviour modification works? Downing Street now runs a special team (the Behavioural Insight Team) whose job is to make people think the way the way they are told to think.

They call it the 'Nudge' unit - it uses similar techniques to the anti-smoking brigade to make people feel 'dirty' if they don't think in the approved fashion....

My thinking was modified long before shiney faced Dave got started. Discovering that my Nans ceilings were white, not browny yellow, when I cleaned them before decorating would have been enough even if I wasn't a confirmed non-smoker. Returning from the pub stinking of others peoples smoke made a difference too.

If the "approved" way of thinking sees British American Tobacco bosses out on their ear, then I'm good with it in this case.