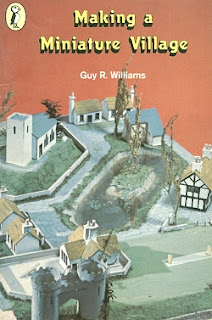 It's funny when you find an unexpected author. Guy R Williams was Pendon's CME for many years and responsible for some of the finest model railway engines ever built. I'd like to own a Guy Williams loco in the same way I'd like to own a Canaletto painting.

Which means this little book will come as a surprise to many modellers. It's not telling you how to build something for Pendon, or even to anything approaching Pendon standards.

Follow the instructions and you'll create a crude model of a small village. The thing is, that if you do, you will have received a good grounding in basic model making and maybe, just maybe, one day you will aspire to those exalted levels.

The text is simple but doesn't talk down to the reader. Plans include dimensions in mm so you'll have to learn to measure and mark out your cardboard or strawboard (remember that?). A baseboard (60 by 90cm) has to be made and ground contours built up. Add a railway track and you'd actually got the basis for a nice little layout. 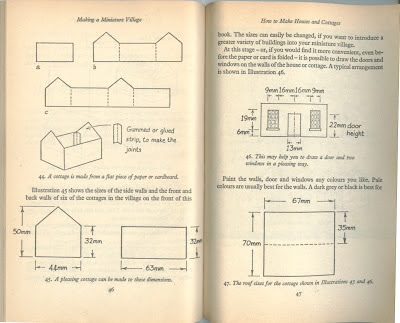 Despite being aimed at children, I reckon quite a few grown-up modellers would get a lot from reading this. While the models might be a bit crude, with more effort on the details, they could be turned into realistic representations of real buildings.
The layout of the village is a bit Pendon-like and not unrealistic. The church, duck pond and green are the centrepieces. Oddly, there are no shops or a pub but I suppose you could convert some of the houses into these if required. 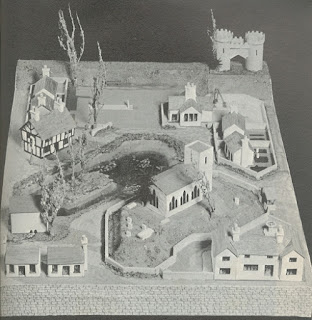 I think the scale is just over 3mm:1foot. I wonder why they didn't go the full 4mm - the plans aren't full sized so it's not a problem fitting them onto the page. Then kids could have used some model railway figures and even a few toy cars. Maybe Williams wished to stick with the bucolic past and ban the motorised menace from his village.
Published in 1970 for 75p, if you want a copy now it's going to be second hand. ﻿
﻿
Posted by Phil Parker at 5:30 AM

I believe I've read that as a child. I found one of my old notebooks and there is transcribed diagrams from it.

A chilling moment from my childhood there Phil as I realise I must have had the book as I did make the half-timbered cottage. My standards have gone downhill since. ;)