Models from the cupboard: Class 20 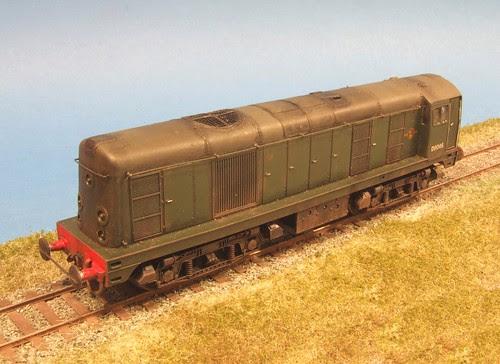 Class 20 models used to mean Hornby Dublo. The mazak bodyshells were untouchable by anyone other than the most committed modellers with a good supply of drillbits. Then along came Lima with a well-detailed plastic version. Hooray, now we could have a charismatic long-nosed diesel loco for the layout.

Of course, in the good old days things weren't perfect, The handrails were moulded into the side so you were faced with living with a silver-painted lump along the top of the bonnet, or scraping it off, touching up the paint then then replacing it with Gibson handrail knobs and wire. Real masters of the craft did this although why they then left the bonnet catches as moulded items escapes me for the minute.

Underneath, the Lima mechanism either worked well or it didn't. Pancake motors come in for a lot of stick nowadays but the good ones were fine for anyone who wanted to run a layout rather than show of their mechanics. Those who bought models from a shop instead of mail-order knew to get them tested first. Wheels on the other hand, used flanges straight from your local Pizzeria but were easily replaced with a drop-in set from Ultrascale. If you could get them that is, supply was always an issue.

At the front, I removed the headcode box and replaced with with Crafsman models detailing bits to provide lamps. On the top there's an etched grille which replaces the moulded version.

I have a sneaking feeling that the grilles on the bonnet sides aren't perfect but would need someone to explain this, or take a good look at a set of photos. I'm sure I did this when I built the model as it is the only member of the class with round buffers AND a ladder on the bonnet side. This is a bit crude, which is why you're looking at the other side.

Despite this, I'd be happy to take this model out of a box and plonk it on a layout. Considering it must be at least 15 years old, that's not bad. Or I have rubbish standards - you decide.
Posted by Phil Parker at 5:30 AM

Phil- The Hornby Dublo body was plastic, one of the first I believe.
Steve

Really? Oh well, you'd still need to face the wrath of the Hornby Dublo collectors and that 's more challenging than any bit of mazak.
:-)