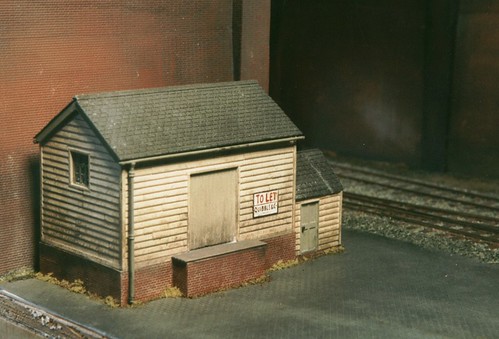 A few days ago, I received an unexpected message.Many years ago, my father and I build an 18ft by 6ft roundy-roundy OO gauge layout called "Melbridge Town". It was based on a trackplan in MRJ by Barry Norman for (I think) Nottingham Thorneywood Station.

We liked the look of it because it offered an urban location, most of the station building could be off-scene and there were transfer loops for freight that we though would head off to the docks in our world.

At the time, we fancied a step up from small shunting layouts to something where we could watch the trains go by, but still shunt wagons around.

The scenic boards were built and PCB track  made and laid. I made well over 20ft of retaining wall, a soul-destroying task. Wiring took ages and I tried to incorporate the panel along the entire back of the layout to reduce plugs and sockets - an idea that didn't work very well.

Lack of space meant that we had to build the end curves and fiddle yards in a weekend at the railway clubrooms. The 6ft traverser fiddle yard was rubbish but we didn't have time to develop it.

Anyway, we took the layout to Banbury and Derby shows. Basically, the fiddle yard was nailed down so the non-sliding table didn't. Trains ran around the model and looked OK, but we weren't happy and by Derby, the model was up for sale.

Anyway, it went to new home where some developments were carried out, including binning the fiddle yard. I saw it at a show and was really pleased it enjoyed a new life. The thing worked OK and could take large-ish locomotives and long trains.

Had we enjoyed somewhere to erect the layout and leave it up, it would probably have finished it, but the lesson learned was never to build more model than you can put up at home. To do so means you can't debug it properly.

We don't even have any photos of the model. The few we did, were lost when some water got into the drawer they were stored in years ago. The shot at the top is all that is left.

Anyway, it turns out the layout changed hands again. The new owner stripped some of the wiring off as part of a move to DCC, but hasn't done any work on it for five years. The model sits packed up in his garage and needs a new home again.

So, if you want a moderate size continuous run layout - for free - and don't mind getting in a van and collecting it from Barrow-in-Furness, then drop me an e-mail and I'll put you in touch with the current owner. You'll need to be ready for some work, but less than starting from scratch. If I had the space, I'd take it back for old times sake, but I don't, so I won't.