Look at this photo. What have I done wrong?

Yes. Yet again, I've but the signal levers in their frames back to front. The hand grabs should be facing away from the signalman, and if the majority of the levers are off, as they should be, then I have them on the wrong side. You can tell that it's taken me a long while to spot this as they are at the painting stage.

Now, I could ignore this, but since it's for a mag feature where I need to take close-up photos, the error had to be fixed. 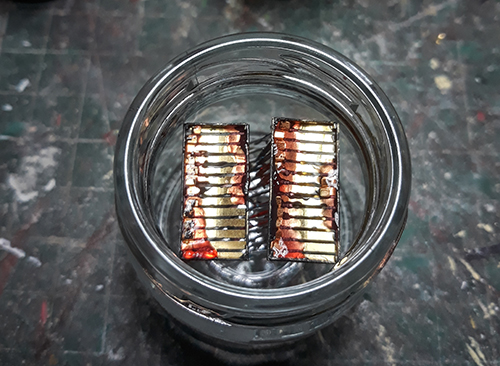 Assembly was with superglue, and it had set hard. With nothing to lose, I stuck them in a small jam jar with Zap superglue debonder on all the joins. These were left overnight to let the chemicals do thier job. In the morning, a little waggling released all the parts. Next, they parts had a batch in cellulose thinners to remove paint and glue. The remaining adhesive had turned to a rubbery substance a bit like a stiff Prit-stick. I picked this off using tweezers, and the result was a kit, ready for me to build all over again. 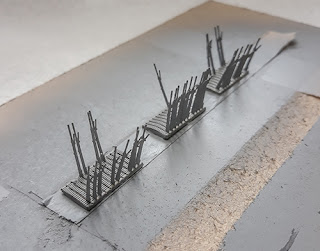 This time, I paid attention and put them together properly. I'm pleased the debonder worked as well as it did. My fall-back was to take the levers outside and heat them up with a gas torch. However, doing that releases some rather nasty chemicals, so it's not an appealing choice.

I use nail varnish remover to debond superglue the type with acetone in. This works well.

Am I being stupid, couldn't you fix both mistakes by just turning the frames 180 degrees?

James - No (and it's not a April fool) I did this last time and was castigated because most of the levers were on rather than off. Apparenlty this is unlikely, and making excuses that they show up in the photos better, isn't believed by anyone...

Acetone dissolves superglue. When the nozzle and cap of the bottle gets clogged I take them off and soak in a jar with a little acetone, replacing them on the bottle with cleaned ones.