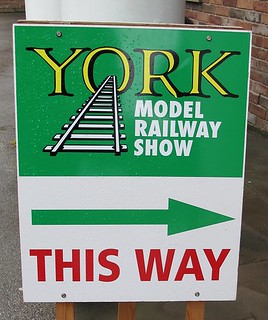 It's Easter Sunday, and that can only mean one thing - getting up late and scoffing chocolate eggs.

Well, this year and last anyway. In days gone by, I'd have been in the car bright and early, heading to York for the model railway exhibition. Sometimes as a visitor, sometimes as an exhibitor.

Back in February, I posted that the show I missed most from the calendar was Stafford, as it was such a fun day out. This is closely followed by York, and only because thanks to the price of train tickets, it involves at least 5 hours on the motorway.

Those hours of tedium are always amply rewarded with a show I've been to for at least 3 decades on and off. I remember my first visit, when the event took place in the city centre. My pick of the layouts was a model of the Wisbeach Tramway. Ironically, it lived around the corner from me, built by modellers I came to know a few years later!

I miss those city centre days, especially as an exhibitor. Nipping out while on a break and being able to wander the streets to watch the buskers was such a special experience. I understand the reasons the show moved to the racecourse, and it has proved to be an excellent venue, but I do have a soft-spot for "in town" shows.

York has a special atmosphere. Those attending have, in the main, been doing so for years. As a punter, I can probably guess where each trader will be. What I know is that it's old-fashioned enough not to be filled with box-shifters. York is a modellers show with plenty of kit and bits stands.

Part of the atmosphere comes from it being a 3-day event. Exhibitors get to know each other more than shorter events and you get into a routine. This was even more the case in the days of the 3.5 or even 4 day show when the last day was Tuesday, for reasons I never understood. Losing that day was a shame, but the crowds never justified it for the trade.

As an exhibitor, it is my favourite event. My dad and I always felt privileged to be invited to a show with so much heritage, in such a lovely place. We did our best, and in return, they look after us. Years ago, there were several apres-show events and although the infamous barn dance never appealed, I used to enjoy the Saturday night sing-song at the Brown Cow. Ian Futers on the piano, and Timmy Taylors Landlord on draught. Brilliant. That ha dried up as the show evolved, but those three days in the racecourse were always enjoyable.

I immediately zoned in on the mention of the Wisbech Tramway. Was this the model of Outwell, the n scale (rough) approximation of the whole route, or another model that I am not aware of? I have a bit of an unhealthy fascination with the line which although I grew up in the town of March, the line was gone years before I was born. (The coach travelled through Wisbech en-route to the NNR for restoration in the year I was born.)
I have every book I know to exist on the subject, along with a large folder of articles. It's incredibly rare for the internet to show up a photo that I haven't already seen...... (I did say it was an unhealthy fascination) I cannot wait for restrictions to be over so I can drive back over that way and follow the route of the line once again. Interestingly, one of my sisters now lives on the edge of what was once the Upwell yard.

Phil, Tuesday, the fourth day, was because it was like an unofficial extra bank holiday in the old West Riding area Yes I know York was in the North riding technically, but it was close enough. Lots of businesses and firms were still closed so there was a ready supply of customers.

Pay attention Nick - of course, it wasn't N gauge, don't you know I spend my whole life hating the scale? :-)

The model I'm thinking of was OO and I don't think covered the whole route. An N gauge version that did would certainly be interesting. Proper trains in landscape stuff but on a rural scale. There would be loads of potential to develop the scenert and show the line meandering along.

I'll try and find the video of the N gauge model, it's owned, (or at least was,) by somebody in the Wisbech area. The landscape and feel is correct, even if the actual layout isn't accurately modelled.

In the meantime, I believe this may be the model you saw, it's the best well known one and a great model https://www.rmweb.co.uk/community/index.php?/topic/4652-outwell-village/&hl=wisbech