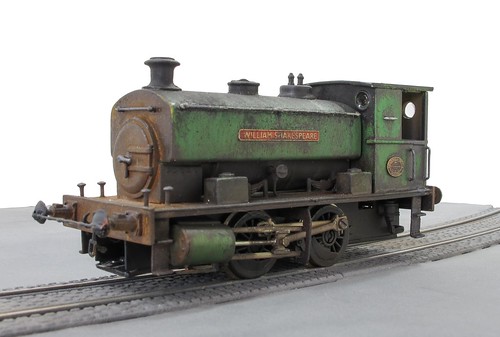 This little Barclay is built from a DJH Beginners whitemetal kit. It was a Hornby magazine project that was nearly a complete disaster.

Not the build - that went very well. The reason this isn't the cheapest kit in the world is because a lot of R&D has gone into making it easy. Some cheaper kits achieve their price point by dumping lots of fettling on the modeller. Fine for me, bad for a beginner who hasn't earned their bodger stripes.

The problem cam when I painted it. As I recall, the deadline was looming (they always are) and I weathered the model in the spray booth. In my enthusiasm, I overdid it massively.

Tentatively, I attacked it with turps soaked cotton buds to see if I could remove the filth and try again. The result amazed me. As the paint cam off, it left what I considered one of my best weathering jobs. Dirty, but with the paint showing though. 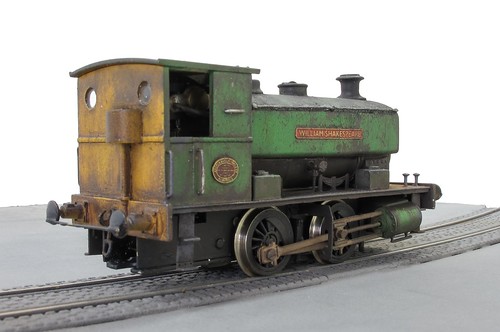 At the time I was just relieved, but since then, the "dirt then cleaning" method has become standard for me. I usually add a bit more dirt afterwards to good effect.

Would I have developed the technique without things going wrong? Maybe. Martyn Welch covers it in The Art of Weathering, but there's nothing to beat actually trying something to prove to yourself that it works.

And I bet some people think mag writers get things right all the time!

Your comment about that kit has made me think, not for the first time, about how many modellers are lost to the hobby because of the well-meaning but flawed advice to start with a "traditional" beginners model - the old Airfix Spitfire of my youth. Invariably that means something basic and outdated, rather than something that shows how a well-designed kit should go together. The knock on effect is that people learn the wrong lessons from the experience.

I built one to EM. It is a nice kit, well thought out with decent castings. I recommended it once to someone on RMweb who wanted an industrial kettle, but his answer went along the lines of 'I'm not paying £120 for something that I have to build myself'. No hope there....

Who would have though that industrial locos are now so mainstream that you can get them RTR?

Very true. I remember discussions on the 3mm forum with people saying old kits were a good starting ground for beginners - that's old kits requiring a massive amount of work to sort out wonky boilers and badly fitting parts. They suggested it was a useful learning exercise. To me, it's a good way of putting them off the hobby!

The problem is that a well-designed kit will cost more than an ancient pile of junk.

The other thing to note regarding price is that it was sold complete (apart from paint'n'glue), so no time spent chasing motors, gears, wheels etc. So take that into account and the price was realistic, as the hardest part (for a beginner) was done for you.

I fitted longer EM axles and re-profiled the flanges in a lathe. And it was still an easy build.

It's hard to explain to a beginner that the kit they are looking at needs 70 quids worth of stuff added to it - and when you do that, the DJH model looks much better value. Better still, as you say, the hardest bit is done for you.

A beginners kit needs a lot of thought, not least when it comes to the instructions. In my lecturing days, I was very aware of the difference between students just following instructions and those who learned from the instructions, and that it was my responsibility to ensure the latter.OK my dyspraxia doesn't help, but even today I find myself thinking "Do I presume the half etch goes on the inside or the outside of the fold?"

And instructions take time to write - which costs money.

I was just reading the latest EMGS Newsletter, with a review of building the Judith Edge/High-Level Ruston 48DS. Leaving aside that Hornby have probably ruined the market for it, it highlights the simple things instructions can miss out on, like whether the suspension arms go inside or outside the frames. Having said that it would be interesting to see a state of the art kit built from the perspective of, what is the term "The careful beginner"

I reckon Colin Massingham got things right at one show a number of years back.

I was looking at one of his kits - trying to work out what would be involved in building it - then put it down, saying I wouldn't buy it because I didn't feel I had the skillset and experience to build it to a standard I'd be happy with.

His response was along the lines that he wouldn't have sold it to me anyway - essentially for the same reason.

I thanked him for being straight with me - and we parted on civilised terms.


Just to make things clear, at shows, I like to check out a lot of kits etc. - quite a few of which I would never choose to purchase or attempt to build.

Whatever the score, shows present my only chance to see what certain products (including kits) are actually like - and what's likely to be involved in building certain kits. As I've got an engineering background, it should surprise nobody that I like to see "what makes things tick" or how things go together - in fact, it would be worrying if I didn't.

In other words, you can't necessarily draw any conclusions from me having a look at kits from some suppliers at shows. All you know for sure is that, if I handle anything, I'll be careful and I won't damage anything.

As for whether I buy anything afterwards, I'll decide that after I've had a look.


By the way, I agree with the point about old / dodgy kits and inexperienced modellers. Although I'm sure that some great kits were marketed in the past, there were also some lousy ones.

I don't think it would take a genius to guess which sort of kits are more likely to have remained unsold in a shop for long enough for them to be desperate to get shot of them.

Then we come to kits that might have lined the back of our cupboards for the last few decades. They might be good kits - which have simply been stockpiled because we don't think they'll be available when we really want them. On the other hand, are they unbuilt because we have up on them?

Unfortunately they seem to have dropped it from their range

That Hattons Barclay will have killed the sales sadly.

There's something nice about making a kit though. It's a mix of challenge, discipline and pride. You can say at the end that it's something that you actually achieved (assuming that it's gone together okay).

It amuses and disappoints me at the same time when you see examples of RTR models that somebody has plonked on their layout and everybody is admiring them as if the modeller had done something themselves.