One of my best models ever is the Parker's Guide feature in the September 2013 issue of Hornby Magazine.

People have been banging on about the lack of industrial locomotives ready-to-run for a long while. As I was building the model, MREmag.com's letters page was full of people requesting one.

As a starter kit, it's a good one. I built the model with superglue. At no point was the soldering iron plugged in. If you can build a plastic kit, you can build this locomotive.

Just as the build was approaching completion, and with a deadline looming, there was very nearly a disaster. I'd given the model a very heavy weathering job. It really was filthy. A finishing touch would have been to clean the handrails a little to show the muck had been brushed off by the crew. A damp brush was flicked on the saddle tank handrail - and I took off a chunk of dirt from the tank side.

What do do? I couldn't re-weather that corner. The only option was to take a deep breath and try to clean the entire model. Damp cotton buds simulated the cleaners cloth. The result was amazing. My model transformed from a filthy dirty beast into a filthy but cared for one. A little re-weathering along the tank top and cab roof completed the task and I think looks pretty good. It's certainly a relief! 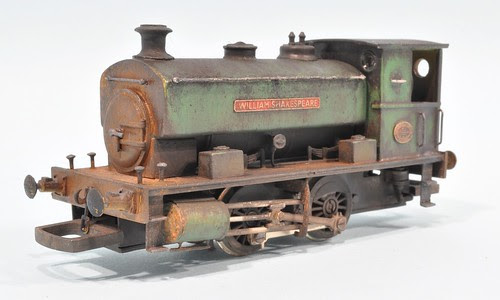 Elsewhere, we wrap up the Clayhanger Yard story taking it to the Hartlepool show. Finally, this issue arrives with a booklet of Frequently Asked Questions. 29 pages answering common modelling problems. Guess who took care of the kit building ones? In fact, there is a clue to the next Parker's Guide subject in there...

Is that the DJH kit? Looks great.

Phil, do we have to buy the magazine to find out what the kit actually is - that vital information seems to be lacking.

You've done it now, Phil. That Barclay has got my Mojo going...I will now have to add it to the queue!

James. Yes you do. That's why I do it. There's an excellent article on building the thing inside too.

So don't just look at the DJH website, get down to WH Smiths now!

Fortunately I already have an on-line subscription

I built one of these many years ago, nice castings, well designed chassis with double reduction gearing, it all went together very easily.
Like you I carved off the nameplates and moulded handrails.
I also built it to EM just by using longer Romford axles and washers. The wheels however were the older coarser profile, not a problem as I was working as a turner at the time so it was just a matter of taking them into work and skimming down the flanges.
When I've mentioned the kit to forum folk wanting a RTR industrial they mostly just complain about the price of it...

It's not a cheap kit but I feel it's worth the money. You get a model where all the thinking has been done for you. Everything is in the box and you ARE going to finish it.

Of course, what everyone on forums wants is obscure prototypes for about 20 quid. It isn't going to happen.