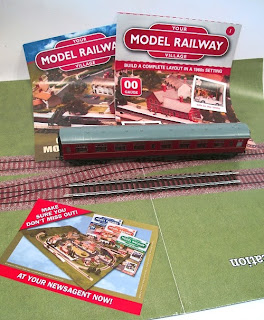 Your Model Railway Village is a partwork from Hachette. Over 120 issues, the buyer is provided with a trackmat, trackwork, rolling stock and buildings to build a modest OO gauge train set.

The first issue is on sale for £3.99 and has been eagerly snapped up by modellers as for the money you get a Mk1 coach and straight length of track. The makers of both items are a mystery. They may possibly be simplified copies of Bachmann models, the coach certainly seems like theirs when you look at the couplings. The track looks a bit Hornby.

Carefully examining the photos, I think the footbridge appears to be a shortened Airfix/Dapol model. The road vehicles are diecasts but the rest is a bit of a mystery. It appears that the buildings will be supplied as pre-painted plastic kits split over several weeks.

By this point, most modellers will go into standard "I hate partworks" moan mode and whinge about the cost of the thing. £1073.80 is a pretty hefty price tag for a train set. Add on this this the loco, controller, baseboard and all the sundry bits required to make a model railway.

The biggest problem I can see though, is the time taken. Assuming this thing is aimed at beginners, and young ones at that, then the time taken will be a bigger issue. 2 years to complete the model is bad enough, but if you look at the trackwork being offered, in a month, you'll have 4 straights and a curve. On that basis, you could be looking at nearly 6 months before the tyro modeller sees a train run. Will they really stick around for this?

They will also need to build a baseboard, you can't ship these in A4 sized slices attached to magazines.

More of an immediate problem is that unlike other partworks, all you can do with the first issue is unpack the coach and length of track (which isn't even long enough to fit the carriage on) and read the paperwork. Other models allow a little hands-on building to get you in the swing of things.

Will I buy the rest of the issues? Not a chance, but then I'm a long way from the intended market. I would like to see the buildings as they could be a lot of fun.

I'll be honest though and say this is one I can see not making it to the final issue. Aside from the cost and time taken to finish the thing, I suspect that modellers are snapping up every copy in WH Smith for the cheap carriage. That means none left on the shelves for those who would get something from it until part 2 arrives. And who wants to start at part 2?

Your Model Railway Village website
Posted by Phil Parker at 5:30 AM

No problem missing issue 1 because people can subscribe online at http://modelrailwayvillage.com/.

I was very tempted by the 'cheap' coach.

The associated magazine also has articles about railways and the hobby in general so, there is more for your money. Clearly aimed at beginners who will appreciate the 'hand holding' approach to owning a layout. Hopefully they will become ardent enthusiasts to keep the hobby alive in the future.

True. You could treat it as a magazine subscription with a gift every issue. Would be nice if the included mag had something about railway modelling in it but then this is only issue 1 so that may change.

I suppose the problem with subscribing online is that you need to know about the magazine in order to subscribe. If all the 1st issues sell out quickly with existing modellers (who are unlikely to subscribe) snapping up the cheap coach, then the average punter is never going to see the magazine at all.

I definitely can't see this one making it to the last issue - or even a quarter of the way there.


Anyway, anyone setting out to build a complete layout from scratch would do far better to visit a decent show or club open day.

They could follow this by getting a prepacked trainset - and a couple of years worth of 1 or 2 mainstream model railway magazines - and join some internet forums.

Apart from learning a lot more, they'd also be quids in.


None of this should detract from the cheap coach though - it's a great way of honing modelmaking skills.

There are already noises on RMweb about a "how to improve / convert this coach" thread - I can't see it being too long before someone does some magazine articles based on a similar theme.

Buying a train set would certainly be cheaper but the advantage of a partwork is that the magazine holds your hand through the process. Buying mainstream mags won't and as for forums - you can't leave a beginner to the mercies of a hundred different but strident opinions and expect them to survive.

To be honest, a Cyril Freezer book would be a better bet in this instance, and a LOT cheaper!

I certainly understand the carping about the price, but I kind of like this idea.
We don't have anything like this in Canada that I am aware of (though I will check with my LHS and the bookstore). The anticipation of receiving something every week seems really exciting for me. It would be especially good if the project only took a short time each week and I could see it develop slowly.
It would also be cool if someone did a photo a week YouTube thing with this.
Is this kind of thing a tradition in the UK? Do they do this for other hobbies as well?

You can see inside pages of issue 1here and almost read the text http://www.hachettepartworks.com/our-titles/model-railway

In reply to 'jackofallhobbies' comment the answer is yes and yes.

Thanks for the answers. I checked out the link provided above and I found an entry on Wikipedia. Wikipedia also mentioned the rather high price.

I still think the idea has merit. It definitely could spruce up the magazine trade before they go completely digital.

Not bad but pricey and will take 2 years to complete.But i suppose British rail has always been a bit slow ha ha ha

If this gets a few thousand people who don't alrady have model trains into the hobby it can only be good. Not aimed at anyone that is already into model railways I think.

I'm on issue 84 at the moment I find this handy each issue breaks down into 5 binders 1. How to 2. Model Railways 3. History of railways 4. Railways in uk 5. Preserved railways. I find the 1st 2 binders invaluable as I'm a novice at model making 3 left hands so the advice and tips are great the buildings are good too. I have to admit I bought a train set and extra track and not using plan provided as I couldn't wait 2 years for the track to be completed and also I don't have room for a 7x8 ft baseboard. So I'm using the magazine purely for technique and accessories.

Hi greetings from South Africa.We are at issue 78.I built plenty part works models (two Lancasters,Aston DB 5,Mc Laren F1,Red Bull RB5 etc)over the years.Over and over I am shocked at the piece meal instructions.There is no logical sequence.No item or scene is done and dusted in a few issues.You also have no idea what is coming in future issues.Sadly I ALWAYS fall in the trap.I would like to know what is Hachette plan with the turn outs.I cannot find any info on the web,save looks like a Peco 75.Any help?Thank you Gavin at joyntg@mweb.co.za

More greetings from South Africa. I fully agree with Gavin's comments re the piece meal instructions. I keep hoping that my next issue will enable me to complete a section. I am currently on Issue 87 and I am building as far as I can when the issues come. I have adapted the layout due to space constraints: have dispensed with the hillside area and tied in the new layout to an existing town layout. I have used peco track instead of the Chinese track supplied and I am very happy with how things are going so far. I would be very interested to have contact with others in SA who are building this layout.