Finally, the worst bit of making the bookazine 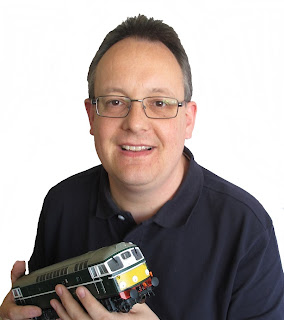 "That's a bit egotistical. We come here for picture of trains and boats and stuff."

You're right, it IS egotistical but it's my blog so shut up.

The photo represents the worst bit of writing Modelling British Railways Diesel Locomotives. Worse than trying to fathom out the differences between the Peaks - something no-one ever bothers doing as it's so complicated. No, it's taking the mugshot that is supposed to adorn the Introduction page.

I hate having my photo taken.

I felt I should be holding a loco and happily had a Heljan Class 26 around. O gauge works better for this, OO tends to disappear and N gauge might as well not be there at all. The flipping thing weighs a ton and I had to hold it for a while to get a halfway descent shot. Let's hope it was worth it. And that the designer heads my request to use the picture SMALL.
Posted by Phil Parker at 5:30 AM

You're much taller than I thought.