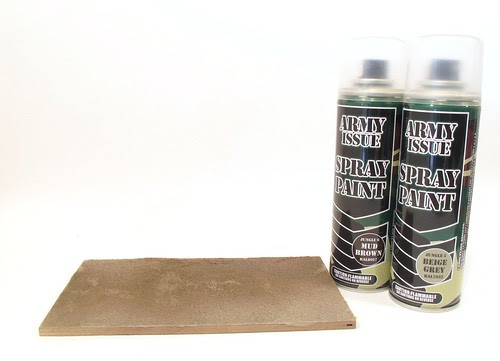 I see that cove Nevard keeps banging on about not using official model-making materials. Not sure that we want that sort of commie talk in this blog but I think I might be indulging in a bit of this myself now.

Heading on down to the stores a few days ago (Can't tell you which stores. Official Secrets and all, but if I tell you the cost was 99p you can try and work it out for yourself) I spotted some cans of Army Issue Spray Paint. It seems that some wallah from the MOD has hit on the cunning wheeze to dump all the left-over tank colouring into aerosols and flog it to the sort of person who likes to wear fatigues while stationed on the sofa and watching war films on their giant plasma screen. Jolly good plan which should help us pay for Trident in a jiffy.

Anyway, I tried out a can of "Mud Brown" and "Beige Grey" on the base for a diorama. A quick squirt of mud followed by a dusting of grey produced a realistic finish in a matter of seconds. You might want to ignore the colour printed on the cans, the mud is far lighter than this suggest but then that's MOD mis-information for you.

The only problem is that the dashed things smell so bad. No idea what the paint is made from but I wouldn't be surprised if those chaps in Porton Down have had a hand in it.