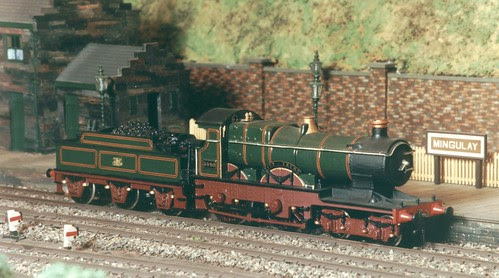 Let's finish this weeks selection of photos from Alan's album with one of the most famous steam engines ever to run - City of Truro.

I'm fascinated by this model as it's one that defeated me many years ago. Based on the old Airfix, or possibly even Kitmaster, plastic kit, Alan has produced a chassis to make it into a running model. That's not an easy task as it involves tackling the outside connecting rods. I couldn't persuade the Romford cranks to stay quartered. The trick, apparently, is to fit a locknut behind them but I didnt' know that at the time.

Anyway, in addition to making the model work, the kit has had all these raised lining removed and replaced with accurately applied transfers. Close inspection of the photo reveals that the handrails are still the moulded ones from the kit, although once painted silver, it's difficult to tell. The name and number are etched so I assume that the handrails were left as removing them neatly is a bit of a pig to do.

I hope you've enjoyed the selection of pictures. Perhaps I'll return to the albums again in the future as I do feel they deserve more of an airing than being stuck on a shelf. Of course, it you are a member of the L&WMRS, you now have an idea what is on those bookshelves!