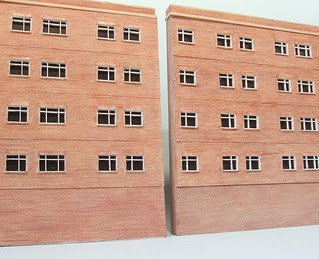 I'm working hard on a lot of non-blogable (Read: Stuff that will appear in magazines) work at the moment so finding time to produce stuff that can appear here is a bit limited.

However, if you follow Hornby Magazine on Facebook, you'll have seen some mock-up flats appearing on the new project "Twelve Trees Junction". Above, you can see the more finished version that I've produced.

The basis for the buildings are Skytrex castings. I've backed them with Dalerboard and added some bits from Slaters Plasticard.

Fuller details will appear in the Hornby Mag yearbook later in the year and probably on that Facebook feed too as Mike makes progress with the layout.
Posted by Phil Parker at 5:30 AM