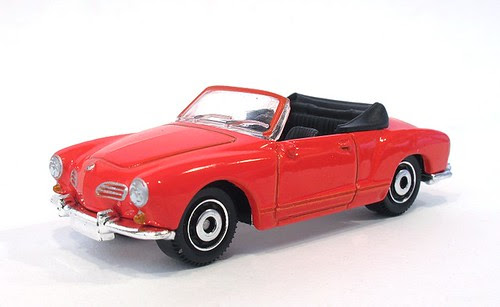 This is my new car. A Volkswagen Karmann Ghia. Not a real one obviously, a Matchbox model.

For those who know nothing about the Ghia, it was VWs sport model in the days when the Beetle was the main product from Wolfsburgs factories. Using a slighly modified Beetle chassis (I think the front is a bit different but aren't entirely sure) the car was sporty in looks only. Indeed, the firm played on this with a TV advert showing it unable to punch it's way out of a paper bag!

As a model, this Matchbox item isn't bad. Compared to a similar shot wound on Wikipedia: The biggest fault is the wheels which are presumably a standard item. Apart from this, is a pretty accurate model.
But it's not a model. Well, I suppose it is but being Matchbox, surely it's a toy? I meant, it rolls well and the first thing I did when I pulled it out of the blister pack was to shove it along the table. Maybe I resisted making "brum brum" noises, but I still wanted to see it move.
The thing is that us grown-ups have taken over toys a bit. I could argue that this toy is the result. In 2009 (this is the 2011 model), someone decided that the range of metal cars needed an addition not made for many years that most kids will never have seen. Good grief, I'm a VeeDub fan and I've not seen that many of the things. As far as I'm concerned, Ghia's are cars to dream of, not to won. £10k gets you a half way decent example and even then you've got an old car notorious for rust.
Anyway, assuming, for the sake of argument, that is is a model, can it be improved? Yes it can. The paint is far too thin. All the panel edges show through and the windscreen needs more paint on the sides. Some detail picking out inside would be good too. The side stripes should be silver and so should the mirrors and door handles. I don't suppose I'll get any 1:59 scale people to drive it but that would be nice.
I'll still brooooom it along the floor though.
Karmann Ghia at the Matchbox Wiki﻿
Posted by Phil Parker at 5:30 AM