One of the biggest "issues" we encountered when Clayhanger Yard went to Hartlepool was that the polarity switching in the Peco points is a bit rubbish. Well, it is once you paint and weather the track messing up the connection between switch blades and stock rails. Just like everyone said it would.

So, the first job was to work out what is going on electrically. Here's the diagram:

Where Red is one polarity, Blue the other and Green one or the other depending on the direction of switch.

All this is good. As long as the wheels have a sensible back-to-back and don't touch the switch rail as they cross the tiebar. Mine don't so all I have to do is switch the polarity, feed it to one of the rails at the frog end and all will be reliable.

To so this I've used SMSR45 standard micro switches bought from Squires. The arm, complete with roller, bears on the operating mechanism and is switched by it. 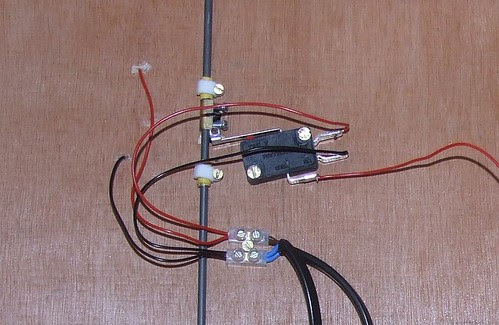 The green areas are wired to the common contact. Red and blue go to the normally open and normally closed contacts - I checked which each needed to be fitted to with a continuity tester. Feeds come from the ring-mail running around the model. I used fat wire for this and connected it to the track feeds via chocolate blocks so adding more feeds for the switches was no problem. In the end, there is only one soldered wire to the track, at the frog.

A quick test of the layout has locos running around quite happily with no stalling. Something we stood no chance of a few weeks ago!
Posted by Phil Parker at 5:30 AM

Can you now do a book on electrics ? I did not understand a word of this. White magic.

Not really white magic. Sort of a glowing blue colour. With spikey hair if you get it wrong.

Book. Well, I did have the point diagram to hand for another reason.

Sorry about the mis-spelling in the title. Blogger won't let me edit this to fix it at the moment.