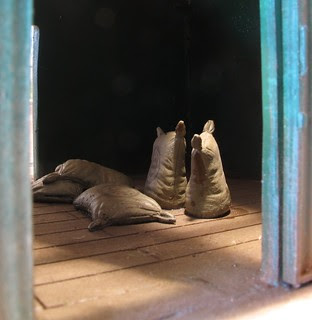 With the electrics sorted, I'm not doing the best bit of layout building - adding detail.

As a start, some of the Skytrex sacks have been added to the goods shed. The first lesson learned is to do this before glueing down the roof. The second lessons is that I am better at fixing a roof down than I thought - it was supposed to be easy to remove and it isn't.

So, there I am trying to manipulate whitemetal bags with a pair of sprung tweezers. Since the bottoms were covered in superlgue, I couldn't just push them into position, they had to be dropped as they would stay where they landed!

Ideally, I'd like to have placed a few nearer the sides of the building but that proved to be tricky so I'm assuming that they are in mid-move. I'll add some to the back of the lorry when it's finished to improve the effect. 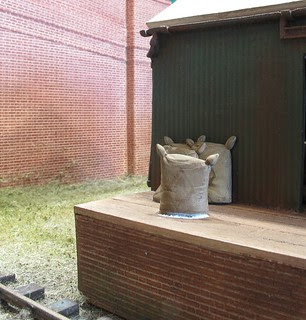 On the platform, I thought a few more sacks would be a good idea.

Here, I was a bit too generous with the glue resulting in a sack that looked like it was sitting in a puddle. "No problem", I thought, "I'll let the glue dry and bang some matt varnish on it. You'll never see it.

Obviously I didn't wait long enough for the glue to dry as a spray of varnish reacted with it and turned white. This isn't pretty but for the moment will have to stay as it is - you can't see the problem from the front of the layout anyway.

Maybe I can claim they hold some white powder (fertilizer/flour) and this one burst? A bit of weathering powder sprinkled around might make this more convincing.