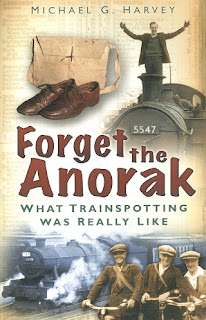 Michael Harvey recounts his life as a train spotter in the 1950s and 60s. Living in Portsmouth, he and his friends managed to travel over much of the country "copping" steam train numbers in quite mind-mangling numbers.

The stories cover many trips out sneaking in depots and spotting the locos found therin. It's a portrait of a long vanished world - steam engines, a pre-Beaching railway system and a generally simpler life.

Most of the tales revolve around traveling by train to some outpost of the country and spending 24 hours a day visiting sheds. Sleep happens but is mostly grabbed on the move or in deserted station waiting rooms once the Police have moved the post-closing time tramps on. Nowadays those rooms are locked up as the Police aren't very interested in clearing them. More to the point, young teenagers travelling around for days at a time are frowned on. This is an era before home telephones yet the authors parents seemed unconcerned that their sons location could be pinpointed no more accurately than "near a railway line, somewhere in the UK".

The picture drawn is fascinating and is very different from today's lives. For a start, it's pretty grubby. The spotters used to carry small haversacks with food, a packamac and notebooks. A weeks worth of travelling didn't encourage them (apparently) to take spare clothes or washing materials. Bearing in mind the extra dirty and grime around in those times on the railway anyway and I imagine the stench from the young urchin with the notebook must have been pretty unbearable yet no one seemed concerned about this.

I'm less comfortable with the attitude that the youngsters got up to a few japes but nothing as bad as kids get up to now and we did them so it was all right. There is a lot of coverage of some "Play up Pompey" gummed stickers produced and liberally stuck to anything and everything. He even comments that they must have been a nightmare to be removed yet considers this harmless while modern vandalism is a terrible thing. Likewise locking all the toilet doors on a train is seen as clever - I suspect he would have a rather different attitude now if the same thing happened. Nor would he be too keen to be on the recieving end of prank phone calls from youngsters singing "amusing" songs down the line at him.

Another area not clear was the authors age. From my reading, he started off in school but carried on spotting well into young adulthood. Since he wore the same pair of Tuff" shoes through the entire story, I assume that he was fully grown by the start. All this makes the antics seem very juvenile - OK, maybe I'm being a little po faced and there is undoubtedly a lot of the stories that were funnier if you were there, but the constant references to drinking Tizer, eating smelly egg sandwiches and being very proud rarely drinking alcohol started to grate a bit towards the end.

On the plus side, there is a lot of detail concerning the locos spotted but not too much. I skimmed it initially but the author pretty quickly tones down the detail which makes the thing a lot easier to read. The writer never forgets a meal - we are treated to a full run-down of each days menu in amazing detail.

Suitable for non-enthusiasts? No. If you want to confirm pretty much all the stereotypes and cliches, this book does it. Viewed as a period piece, it's fine but seen through today's eyes, maybe not.

Maybe I'm a bit young for all this. If you lived through the period, I can see this would be a top nostalgia trip. It's pretty well written, especially once all the spotting details stops, and I whipped through it pretty well. There are even some nice pictures in the middle.

Forget the Anorak at Amazon
Posted by Phil Parker at 5:30 AM

I have read this book and was also bothered about the stickers put about everywhere. As a real train spotting anorak I wrote to the publishers to point out a factual error. The author went on a spotting trip to Swansea and said he saw a King class there. Kings were not allowed to travel further west than Cardiff due to weight restrictions. We would have love to have seen spotting in Port Talbot and Swansea.

This is on my shelf but not got around to reading it. For a very different recounting of one man's connection to railways, have you read Ian Marchant 'Parallel Lines' ? Most likely not everyone's cup of tea but I loved it.