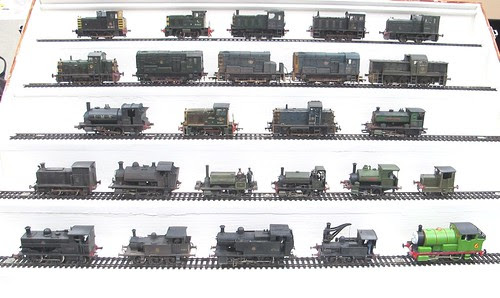 Railex this year was promoted as a shunter special and so I promised to take along a display of model shunting locomotives.

To house the show, I borrowed a display case from the L&WMRS which handily is fitted with OO gauge track. My stockbox was filled to the brim with little locos and on arrival at our stand, I poured the contents of one into the other.

24 locos fitted in to the case, but I had another half dozen left over. This collection is bigger than I thought!

The display attracted a lot of interest. Most people got over-excited at the Class 13 and I explained that it is a pretty simple conversion fully described in the Parker's Guide bookazine. You get a build of the 02 diesel in there too and the Hunslet dock shunter making it excellent value for the enthusiast.

For this newbie, a legend would be fantastic!!!!