How to annoy an "enthusiast" 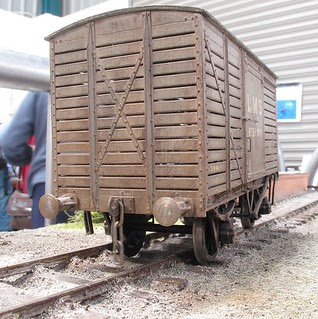 So there I am, shunting on Clayhanger Yard and a wagon derails.

It's never happened at this spot on the layout before and there's nothing obviously wrong so I quickly pop it back on the track and carry on.

My crowd, both of them, run off with their noses in the air.

This isn't the first time I've had this happen. I know that they are thinking:

HOW VERY DARE YOU HAVE A DERAILMENT IN MY PRESENCE? YOU BRING THE WHOLE HOBBY IN TO DISREPUTE WITH YOUR SLOVENLY WAYS! IF I HAD A MODEL RAILWAY THERE WOULD NEVER BE ANY DERAILMENTS! I HATE YOU PARKER!

Which is probably fair enough. After all, I have ruined their day and probably their entire month with my derailments.

Of course, if I were a proper modeller I'd stop running and have an extensive post-mortem to work out exactly what went wrong. I've seen it happen and the crowd can enjoy watching modellers poking at trackwork with magnifying glasses for half an hour or so.

My take is that bad things happen. All derailments have a cause but sometimes getting on with the show matters more than sorting it out. If there is a regular problem with a bit of track or vehicle then it's worth a look after hours but most importantly, entertain the punters.

Punters - stuff happens. Get over it. We aren't doing it deliberately, in fact we like problems less than you as we have to fix them. Putting wagons back on the track is annoying and we don't like doing it so we do our best to avoid problems. However, bouncing a model railway around in a van and then installing it in a hall will a wobbly floor and variable heating can upset the best maintained of models.

To the gentlemen who huffed off - Sorry to have ruined your day. I appreciate that you are probably busy burning your collection as I write. A funeral pyre of old Railway Modellers doubtless blackens the sky. I didn't do it deliberately I assure you.
Posted by Phil Parker at 5:30 AM

Seeing a derailment at a show doesn't bother me. What does annoy me is standing in front of a layout for ten minutes and seeing nothing move while a small DCC problem is debugged (like the lights not coming on or some minor issue). I wouldn't mind if I'd only seen this once, but I've seen it quite a few times. I'm with you on this one, keep things moving and sort out the small problems after the show

A couple of minor derailments wouldn't make me walk away, like many I appreciate that things go wrong at shows, especially when there's an audience present.
Multiple derailments, usually at the same spot, in quick succession however will make me walk off and search out the tea stall. This usually happens on the, er, cruder examples of exhibition layout, where the owners are either happy to put up with poor running or couldn't be bothered to thoroughly check the running when laying track.
I'm with Mark (above) on DCC, again locos and controllers should be thoroughly tested pre-show, I wonder how many are put of DCC by seeing poor running DCC layouts at shows?
As I said though, a couple of glitches are to be expected but too many show poor preperation and don't show the hobby in a good light.

It's true that the operators should know how the layout works before a show. This is partically important with DCC as I've also seen people staring at a controller covered in buttons trying to work out what they should be doing. Unlike analogue, you can't just plonk a device in someones had and expect them to be able to get on with it.

One thing we did find was that struggling with 3-link couplings actually helped start conversations with visitors. Maybe it gives everyone something to talk about?