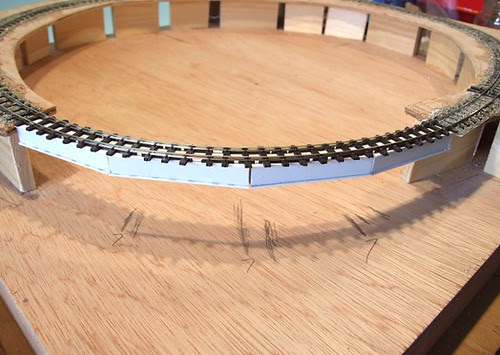 The more observant amongst you will have spotted that I appear to be building a fairground ride rather than a model railway. Track floating through mid-air looks exciting but in real life, isn't a good idea. Passengers get nervous and you tend to find the rolling stock doesn't last very long.

My bridge is in fact a curved viaduct. Lots of looking through books and surfing the web made me hopeful that I could go for a very simple design without leaving for cloud cuckoo land. Big, fat girders with no sides was what I wanted and that's what I've built.

Box girders were made up from plasticard, I know you can buy these things but it doesn't seem extravagant for such a simple job. Initially they were all the same but then I laid them on the track and worked out where the joins and therefore the angled ends needed to be. All the pencil marks on the baseboard shows you that I took several attempts to decide exactly what I wanted, this isn't just a technical decision, the supports would look prettier if evenly spaced and with the middle one in the centre of the gap. This isn't just engineering, it's art !
Posted by Phil Parker at 2:09 AM