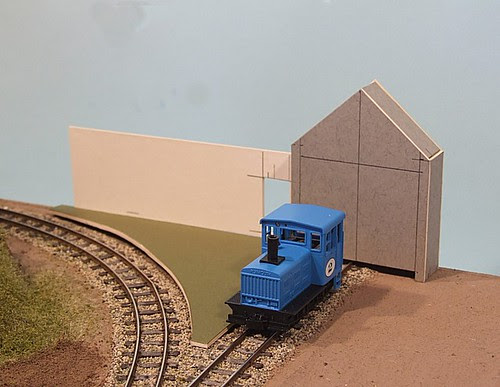 One of my ideas behind the 009 model railway was to try and create lots of vantage points to watch the trains from. In the corner of the board I'd put in a siding to the engine shed and while pondering how this would work out, had an idea that this would be near the car park. That way, the boaters could get their models reasonably near the water and the punters who just wanted to ride trains wouldn't have to wander too far from their motors.

Now I don't have space for a car park but if I assume that the Handyman Hall estate has a walled garden or two - something the Victorians liked to build - I could block the view with a simple bit of brickwork. Watching the trains from behind the wall seemed fun and provided a limit to how much of the tiny scene you can see.
Beside this we have a shed based loosely on the ones at the Evesham Vale Light Railway. Again, there isn't space for this in it's entirety but one of the tricks micro-layout use is to model part of a building so we have about 10mm's worth of it. Not ideal but I ran out of baseboard !

With no plans to work with I just drew things until they looked right. As long as the loco will go in the door, nothing else really matters. Sometimes this is more fun than worrying about every last mm.
Posted by Phil Parker at 1:08 AM

...exactly. Anyway, if it's freelance, why shoukd you care about the last few mm?

It's hardly like you're working from a real life building.